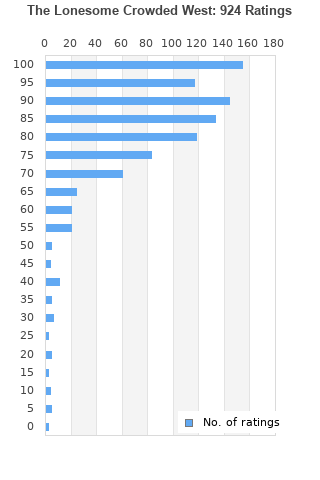 The Lonesome Crowded West is ranked 2nd best out of 15 albums by Modest Mouse on BestEverAlbums.com.

The best album by Modest Mouse is The Moon & Antarctica which is ranked number 140 in the list of all-time albums with a total rank score of 11,702. 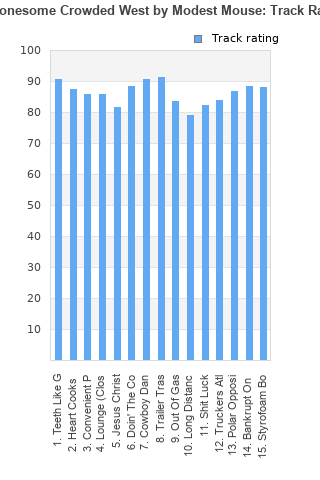 Rating metrics: Outliers can be removed when calculating a mean average to dampen the effects of ratings outside the normal distribution. This figure is provided as the trimmed mean. A high standard deviation can be legitimate, but can sometimes indicate 'gaming' is occurring. Consider a simplified example* of an item receiving ratings of 100, 50, & 0. The mean average rating would be 50. However, ratings of 55, 50 & 45 could also result in the same average. The second average might be more trusted because there is more consensus around a particular rating (a lower deviation).
(*In practice, some albums can have several thousand ratings)
This album is rated in the top 1% of all albums on BestEverAlbums.com. This album has a Bayesian average rating of 84.1/100, a mean average of 82.4/100, and a trimmed mean (excluding outliers) of 84.2/100. The standard deviation for this album is 17.3.

Gets a bit repetitive by the end but there’s a lot of fun to be had along the way, with these bizarre screeching lyrics intertwined with slamming guitars.

I was into Modest Mouse earlier this year and listened to many of their early albums. This one is good but it surprises me to see this in the top 200! I think I'll have to give it a closer listen again.

Building Nothing out of Something may have been my first introduction to Modest Mouse way back in 2003 or 2004. Still a great listen, even though it is an "outtakes" album.

Great album. I don't like it as much as Good news or Moon and Antarctica but it's still great. Best track is Trucker's Atlas

Your feedback for The Lonesome Crowded West