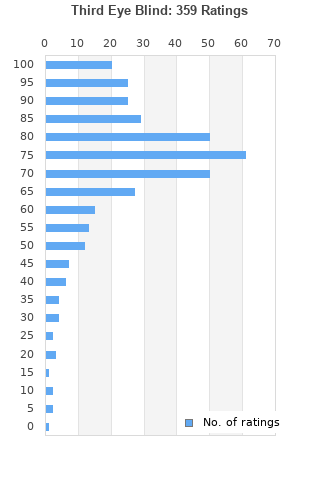 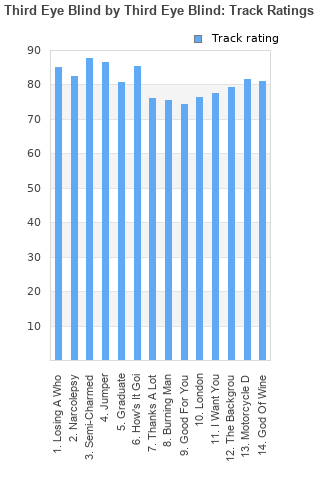 Rating metrics: Outliers can be removed when calculating a mean average to dampen the effects of ratings outside the normal distribution. This figure is provided as the trimmed mean. A high standard deviation can be legitimate, but can sometimes indicate 'gaming' is occurring. Consider a simplified example* of an item receiving ratings of 100, 50, & 0. The mean average rating would be 50. However, ratings of 55, 50 & 45 could also result in the same average. The second average might be more trusted because there is more consensus around a particular rating (a lower deviation).
(*In practice, some albums can have several thousand ratings)
This album has a Bayesian average rating of 73.7/100, a mean average of 72.6/100, and a trimmed mean (excluding outliers) of 73.7/100. The standard deviation for this album is 18.3.

Honestly one of the best 90s records

I love this album so much. It's emotional af, but easily accessible. Simple, but effective. Seriously, it's insane. Interesting songwriting, great vocals and catchy hooks come together for a phenomenal peace of art. It is very 90s-ish, maybe a little bit over the top, but damn, it's a perfect soundtrack when you're on the edge of growing up.

It's a bit too American sounding for my liking but it's not bad.

Third Eye Blind's debut should never be dismissed as average pop rock. I'm not saying it isn't pop rock, but these songs are spectacular from front to back, and just about every track could be a radio hit. Everything on here just rocks my heckin socks off.

This adds to the theory that a bands best album is their first one. It definitely brings you back to the late 90s and reminds you of that time. A lot of memories for me.

The radio hit with do do do do do do do drives me crazy. If they just dropped that disney channel sound on that one song this might be one of the great ones. I feel like studio executives got their hands on this prior to release, because the crappy radio tunes sound so off compared to the rest of the album. too bad. Still, worthy of a vinyl purchase i think.

Criminally underrated, 3EB is way better than their contemporaries like Goo Goo Dolls and Matchbox Twenty

Like most people, I bought this album for the singles which are all great. It sat on my shelf for a while and I stumbled on the last 3 tracks which is one of the best endings to an album I've ever heard.

But personal love for it and it being my go to high school album pushes it 5 star 100 for me. I understand objectively why people do not put it that high. In this case, it really is subjective for me.

3EB is one of my favorite bands of all time and nothing else they make reaches this level.

This record feels so in the moment, and based on the lyrics was written by someone who is probably extremely social, and values things like having new experiences with friends, living carefree, and sex. Check out the bass on "Good for you"

Your feedback for Third Eye Blind