The Fat Of The Land (studio album) by The Prodigy 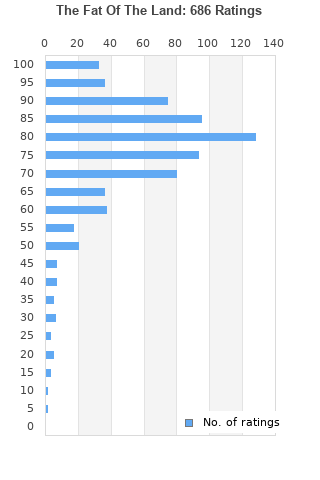 Prodigy. The Fat Of The Land 2CD NEW Sealed incl FAT ep / Keith Flint Keef Skint
Condition: Brand New
Time left: 18h 24m 40s
Ships to: Worldwide
$19.90
Go to store
Product prices and availability are accurate as of the date indicated and are subject to change. Any price and availability information displayed on the linked website at the time of purchase will apply to the purchase of this product.  See full search results on eBay

The Fat Of The Land is ranked as the best album by The Prodigy.

Listen to The Fat Of The Land on YouTube 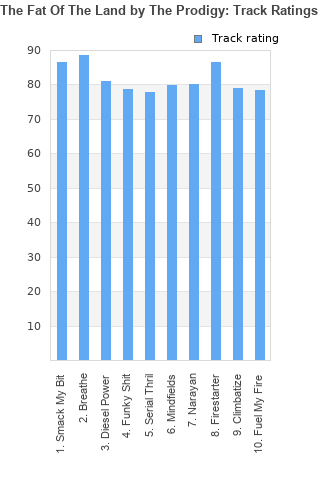 The Fat Of The Land rankings

The Fat Of The Land collection

The Fat Of The Land ratings

Rating metrics: Outliers can be removed when calculating a mean average to dampen the effects of ratings outside the normal distribution. This figure is provided as the trimmed mean. A high standard deviation can be legitimate, but can sometimes indicate 'gaming' is occurring. Consider a simplified example* of an item receiving ratings of 100, 50, & 0. The mean average rating would be 50. However, ratings of 55, 50 & 45 could also result in the same average. The second average might be more trusted because there is more consensus around a particular rating (a lower deviation).
(*In practice, some albums can have several thousand ratings)
This album is rated in the top 8% of all albums on BestEverAlbums.com. This album has a Bayesian average rating of 76.2/100, a mean average of 75.2/100, and a trimmed mean (excluding outliers) of 76.3/100. The standard deviation for this album is 15.8.

The Fat Of The Land favourites

The Fat Of The Land comments

Reminded me of 1977 with the attitude and sheer power in delivery. Breath, climbatise and of course firestarter are highlights. Smack my bitch up is unpleasant in subject matter though and unnecessary in its controversial intent.

The album when they gave up on their dance-orientated British sound and completely sold out to American guitar-loving, rapping audiences, which they are allowed to do, but for me this is their third best album. Good memories though and some great moments.

More like a greatest hits release rather than an actual album

The R Rated Video for "Smack My Bitch Up" is a masterpiece that remains banned from YouTube , if you haven't seen it look it up online and witness greatness

This shit was incredibly edgy when it first came out. There was an intensity and attitude that, while dwelling in a seedy undercurrent, was lifted somewhat euphorically by a breakbeat, in-your-face, bouncyness that drew shadowy characters to the dance floor. In fact it connected with the 'jilted generation' better than their album with that same title.

Breathe is a classic track. The intro still gives me chills when I hear it as I remember the energy that the song is about to trigger. Some other songs on the album fail to measure up to such high standards as this incredible song but in their own right they still form the basis of a very solid album.

When you consider that a melding of electronic and punk rock had never previously been so well produced as this album you would have to consider it as a groundbreaking, progressive classic in many ways.

My first real approach to electronics. A very explosion of energy, some great pieces like the first two tracks and Firestarter. Really really addicting!

This is a pretty good collection of songs, although Smack My Bitch Up stands head and shoulders above the rest. There are a couple other catchy moments, but after a while a lot of the tracks tended to blend together. My main problem with the whole break-beat thing is that everything seems centered around one beat, and there's very little else going on during the songs. Great music if you want to thrash around and throw people to the ground (and if I ever throw a rave I'll definitely turn this on), but I don't connect to it much otherwise, which would make it difficult to come back to.

Your feedback for The Fat Of The Land