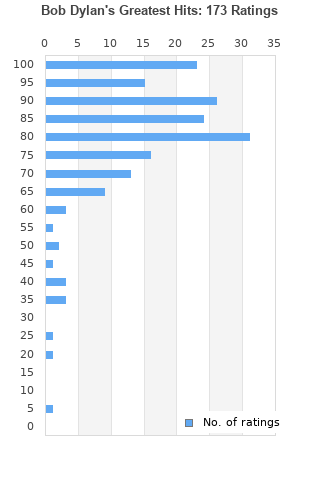 Bob Dylan's Greatest Hits is ranked 33rd best out of 75 albums by Bob Dylan on BestEverAlbums.com.

The best album by Bob Dylan is Highway 61 Revisited which is ranked number 26 in the list of all-time albums with a total rank score of 34,576. 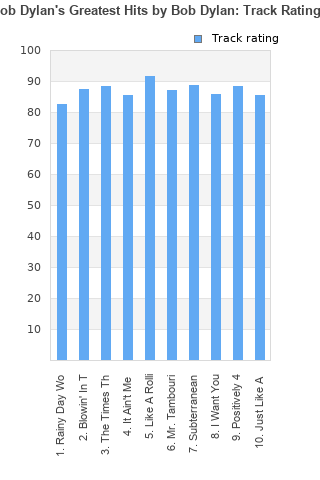 Rating metrics: Outliers can be removed when calculating a mean average to dampen the effects of ratings outside the normal distribution. This figure is provided as the trimmed mean. A high standard deviation can be legitimate, but can sometimes indicate 'gaming' is occurring. Consider a simplified example* of an item receiving ratings of 100, 50, & 0. The mean average rating would be 50. However, ratings of 55, 50 & 45 could also result in the same average. The second average might be more trusted because there is more consensus around a particular rating (a lower deviation).
(*In practice, some albums can have several thousand ratings)
This album is rated in the top 1% of all albums on BestEverAlbums.com. This album has a Bayesian average rating of 81.1/100, a mean average of 80.4/100, and a trimmed mean (excluding outliers) of 81.5/100. The standard deviation for this album is 16.7.

A fantastic, albeit short, introduction to Dylan’s early to mid 1960’s output. “Positively 4th Street” makes its first appearance and is one of my all time favourite Dylan songs. Newcomers to Bob Dylan that enjoy this album should definitely dig deeper with Highway 61, Freewheelin’, Blonde on Blonde, etc.

WTF are people going on about not liking Rainy Day Women #12 & 35? That song's perfect.

Roundly booed by the likes of the Rolling Stone Record Guide for it's obvious track listing (it was a greatest hits album guys) this package stands up sweetly to the test of time. lf I was going to introduce someone to Dylan this would be an ideal starter.

A great Dylan beginner album. I like to think the first track is referring to "stoned" in the biblical sense.

Agreed Romanelli... This is a perfect Dylan album minus opening track (however I did like that song when I was a young kid)... too bad it isn't a real album...

Positively 4th Street is probably one of my favorite songs from him lyrically. All of these song not only have his great poetry, but the better side of him musically. I can honestly say I love the music on this collection.

If you don't know Dylan, then this is the obvious place to start. Omit track one and you have perfection.