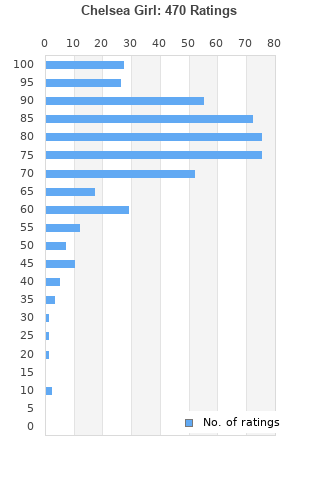 Chelsea Girl is ranked as the best album by Nico. 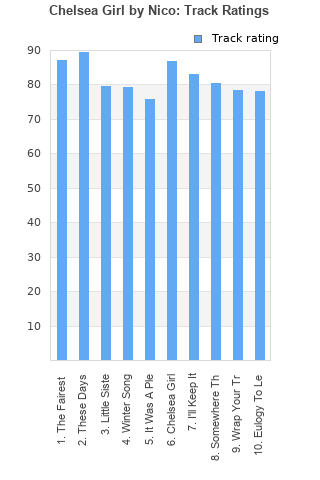 The Fairest Of The Seasons
Rating: 88 (108 votes)Comments:

Rating metrics: Outliers can be removed when calculating a mean average to dampen the effects of ratings outside the normal distribution. This figure is provided as the trimmed mean. A high standard deviation can be legitimate, but can sometimes indicate 'gaming' is occurring. Consider a simplified example* of an item receiving ratings of 100, 50, & 0. The mean average rating would be 50. However, ratings of 55, 50 & 45 could also result in the same average. The second average might be more trusted because there is more consensus around a particular rating (a lower deviation).
(*In practice, some albums can have several thousand ratings)
This album is rated in the top 4% of all albums on BestEverAlbums.com. This album has a Bayesian average rating of 77.5/100, a mean average of 77.0/100, and a trimmed mean (excluding outliers) of 77.6/100. The standard deviation for this album is 14.9.

Her vocal performances here aren't as great as on TVUAN, and production is not great either.

Other than a couple key tracks, namely Chelsea Girls and It Was a Pleasure Then, Chelsea Girl is marred by garish production. This could be a great record, but it really falls short.

Nico is a great singer, but twee pop just isn't made for here. The production is pretty mudded and the songs repetitive in theme and sound. Still, Somewhere There's A Feather, The Fairest Of The Seasons and specially These Days make this album worth a listen.

Best Songs are Chelsea Girls and These Days i like it very much and for me good a german singer like Im german too.

Some parts feel like an extrapolation of The Velvet Underground’s debut and some are more tuned to the solo singer-songwriter. I enjoy most of this album, especially the first half. I’m a big fan of the subtle electric guitars and Nico’s vocals are compelling. I’m not a fan of the strings and feel that they diminish the quality of the album.

Sure she couldn't sing on key. Sure she had the musicality of a door-stop. But Nico exuded STAR. Her cool, aloof ice-queen persona are delivered here for everyone to see. She was unlike all the other 60s, 70s, 80s it-girls because of this. It was typical of her to disown this album and dismiss it as trash. In Nico's evaluation EVERYthing was trash as soon as it was manufactured. One of a kind and a necessary part of any serious record collector's collection.

Your feedback for Chelsea Girl