Younger Than Yesterday (studio album) by The Byrds 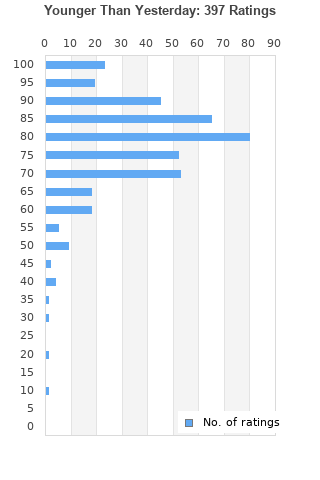 Younger Than Yesterday [Bonus Tracks] [Remaster] by The Byrds (CD, Apr-1996,...
Condition: Very Good
Time left: 8h 15m 23s
Ships to: Worldwide
$8.99
Go to store
Product prices and availability are accurate as of the date indicated and are subject to change. Any price and availability information displayed on the linked website at the time of purchase will apply to the purchase of this product.  See full search results on eBay

Younger Than Yesterday is ranked 3rd best out of 23 albums by The Byrds on BestEverAlbums.com.

The best album by The Byrds is The Notorious Byrd Brothers which is ranked number 767 in the list of all-time albums with a total rank score of 2,487. 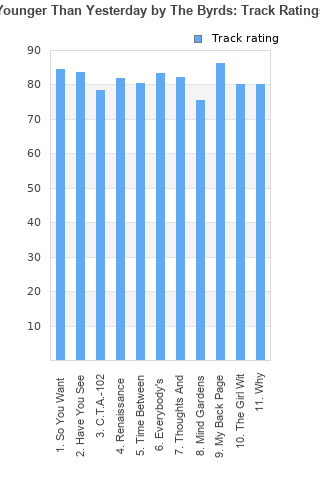 Rating metrics: Outliers can be removed when calculating a mean average to dampen the effects of ratings outside the normal distribution. This figure is provided as the trimmed mean. A high standard deviation can be legitimate, but can sometimes indicate 'gaming' is occurring. Consider a simplified example* of an item receiving ratings of 100, 50, & 0. The mean average rating would be 50. However, ratings of 55, 50 & 45 could also result in the same average. The second average might be more trusted because there is more consensus around a particular rating (a lower deviation).
(*In practice, some albums can have several thousand ratings)
This album is rated in the top 2% of all albums on BestEverAlbums.com. This album has a Bayesian average rating of 78.9/100, a mean average of 78.3/100, and a trimmed mean (excluding outliers) of 79.0/100. The standard deviation for this album is 13.4.

I really appreciate the execution on this one - spacey, psychedelic, and on-point with the jangly, country/folk-tinged sound that so defines the Byrds. 'Younger Than Yesterday' might be their most refined release, and probably David Crosby's best album contribution with the group.

Some listeners will be put off by it's more experimental nature compared the radio-friendly releases that put the Byrds on the map, but those who lean into the atmospheric offerings will find some interesting sounds in the space.

Overall, pretty groovy & pretty out there, but Younger than Yesterday consistently returns to earth after each spacey sojourn. Essential listening for fans of the late 60's pop/folk/psych infusions!

not to my liking. twangy nothingness

I tend to think of this album as the spiritual godfather to all future jangle pop as eventually played by Peter Buck, Johnny Marr and Bob Stinson in the 80s not to mention a host of bands in the mid to late 90s. The variation of songwriters and lead singers makes for an album which doesn't get stale and seamlessly transitions from the earlier incarnation of the band which had just turned over. "Mind Garden" is the big misfire and "CTA 102" is polarizing, but this album is chock full of great songs like "Thought and Words," "Have You Seen Here Face," "So You Wanna Be A Rock N Roll Star," and "Why" along with a pretty famous cover of Dylan's "My Back Pages." This is one my favorite albums of the late 60s.

Like usual, The Byrds are ahead of the curve on this release. There are some country sounding tunes that are incorporated with their ongoing for foray into psychedelia. The album is more consistent than previous Byrds records and features a wide variety of songs while remaining cohesive. More really good stuff from them. Can’t get enough of the classic Byrds guitar.

The Byrds fourth album 'Younger Than Yesterday' may not receive the critical acclaim of 1968's 'The Notorious Byrd Brothers' and 'Sweetheart Of The Rodeo' but for mine it's their best album. Period

It's such a beautifully varied album with so many flavours and music gene's. There's the two Chris Hillman country rock-flavoured songs "Time Between" and "The Girl with No Name" , there's the LSD-influenced "Thoughts and Words" (Hillman again) ,the British Invasion-influenced "Have You Seen Her Face" (a fourth Hillman-penned song) , there's the classic "So You Want to Be a Rock 'n' Roll Star" which suggests certain ironies due to the pre-fabricated aspects of the Byrds own origin, including drummer Michael Clarke having been initially recruited for his good looks, rather than for his musical ability with some fans mistaking the track for being autobiographical , there's the jazz and psychedelia influenced "C.T.A.-102", the moody jazz-influenced "Everybody's Been Burned" , the wonderful Bob Dylan cover "My Back Pages" which would be the fourth song from Dylan's 'Another Side of Bob Dylan' album ,the Indian / Ravi Shankar inspired "Why" and of course the psychedelic "Mind Gardens"

The Byrds peaked right here with this wonderful album

Maybe my tolerance for psychedelia has worn down over time, but there's some pretty painful stuff going on around a couple of timeless classics.

Best Tracks: Everybody's Been Burned, Have You Seen Her Face

An excellent album from The Byrds. Younger than yesterday, really sees the band moving on. Opener, so you want to be a rock'n'roll star, is a sardonic take on the music business featuring trumpet from Hugh Masekela, and it's followed by, have you seen her face, one of Chris Hillman's best byrd songs. Elsewhere, there's hints of, sweetheart at the rodeo, on the countryfied, time between, and, the girl with no name, and, everybody's been burned, is a great David Crosby track. Unfortunately, another Crosby number, mind gardens, is atrocious, an awful attempt at something unconventional, it's the only moment on the LP that stops it from being a total classic. A pity, because everything else here is great, from the brilliant, thoughts and words, and an excellent Dylan cover in, my back pages. All in all, a very good album, just tarnished by a moment of indulgence from Crosby.

The lyrics are so enticing with such universal concepts. I'll be giving this album to my kids whenever those happen.

Your feedback for Younger Than Yesterday