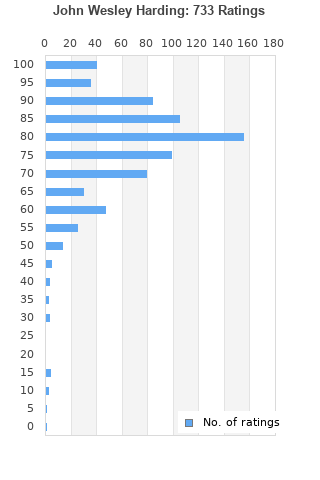 Bob Dylan - John Wesley Harding (2004)
Condition: Good
Time left: 5h 29m 35s
Ships to: Worldwide
£1.90
Go to store
Product prices and availability are accurate as of the date indicated and are subject to change. Any price and availability information displayed on the linked website at the time of purchase will apply to the purchase of this product.  See full search results on eBay

John Wesley Harding is ranked 10th best out of 72 albums by Bob Dylan on BestEverAlbums.com.

The best album by Bob Dylan is Highway 61 Revisited which is ranked number 24 in the list of all-time albums with a total rank score of 39,361. 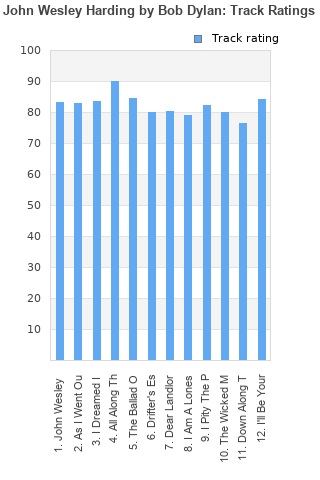 All Along The Watchtower
Rating: 90 (251 votes)Comments:

Rating metrics: Outliers can be removed when calculating a mean average to dampen the effects of ratings outside the normal distribution. This figure is provided as the trimmed mean. A high standard deviation can be legitimate, but can sometimes indicate 'gaming' is occurring. Consider a simplified example* of an item receiving ratings of 100, 50, & 0. The mean average rating would be 50. However, ratings of 55, 50 & 45 could also result in the same average. The second average might be more trusted because there is more consensus around a particular rating (a lower deviation).
(*In practice, some albums can have several thousand ratings)
This album is rated in the top 3% of all albums on BestEverAlbums.com. This album has a Bayesian average rating of 78.4/100, a mean average of 77.5/100, and a trimmed mean (excluding outliers) of 78.4/100. The standard deviation for this album is 14.7.

This was never one of the 60s Dylan albums that spoke to me at the next level, but it's still well worthwhile.

Probably (along with Nashville Skyline) my favorite version of Dylan's voice as he sings as clearly and tunefully as in any of his 60s albums. The focus is on narratives (not a surprise) but with a middle American, folk hero protagonist in nearly every song. Dylan is clearly bucking the trend of what was fashionable in the late 60s by releasing a very straight ahead and non-experimental album (by his standards). The basslines stand out in nearly every song and really help to punctuate the harmonica and increased clarity of Dylan's voice. I will say that the album starts and ends strong with a little bit of a lull in the middle.

Very polished Dylan. More akin to his earlier music than his previous three albums. Bob sounds pretty good on this record and the backing is subtle enough to allow him to shine on most songs. Overall, the songs are a bit too tame and I would've loved to hear some more rock especially considering what he was coming off of. That is not to say that I dislike the album, I don't, I think there are some really great songs but I miss what he was doing. "All Along the Watchtower" is hard to rate because I'm so accustomed to the Hendrix version.

Nice. A lovely, quite gentle album in places. I love the Ballad of Frankie Lee, I Pity the Poor Immigrant and I'll be your Baby Tonight.

Very nice acoustic set of songs by Mr. Dylan. The remastering on this one is wonderful. Bob's vocals are very clear as is the backing instrumentation. The bass really stands out. Bob really hit a groove with his story telling and conjured images with this one. Just a fantastic sounding cd!

A good Bob Dylan output, throwing back at his more traditional style after Blonde on Blonde. Some distinguishable tracks here, the obvious one being "All Along the Watchtower", we should all thank Bob Dylan for creating this song to mister Jimi Hendrix to master later on.

The true counterpoint of Sgt. Pepper's

Dylan's first album since his motorcycle accident in late summer '66. It has a much lighter tone in terms of it's music, but the same certainly cannot be said of the lyrics. This is dark stuff. Ghostly, eerie, even frightening, involving all sorts of characters from, damsels(or is that witches)in distress, unscrupulous landlords, chronic gamblers, and misunderstood loners. The music, though as I said lighter, suits these stories perfectly. The title track opens the album, followed by, as I went out one morning, and the haunting atmosphere really grabs you. The most famous song on the album is off course the stunning, all along the watchtower, which Jimi Hendrix would turn into an apocalyptic rock masterpiece, Dylan's version is not so heavy, but certainly more spooky. I like the fact that hardly any of the songs features a chorus, and I think that adds to the mystery of it all. Other highlights are, the ballad of Frankie Lee and Judas priest, dear landlord, and the wicked messenger. As the album nears it's end, suddenly on the last two tracks, the tone changes. It's lighter, even throwaway, but the pop blues of, down along the cove, and, I'll be your baby tonight, gives us a sneak preview of where Dylan will go next. To the country. John Wesley Harding, is a great Dylan album, just don't listen to it with the lights off. Actually, do. Excellent.

Perhaps a bit of a step back at the time but at the end of the day another solid Dylan album. All Along the Watchtower is one of his best songs.The Ballad of Frankie Lee and Judas Priest was good enough to name a metal band later on. The rest is solid worth a listen.

Your feedback for John Wesley Harding