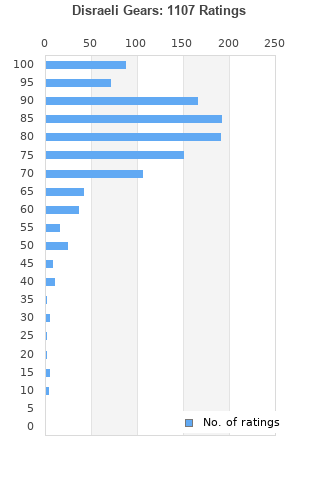 Disraeli Gears is ranked as the best album by Cream. 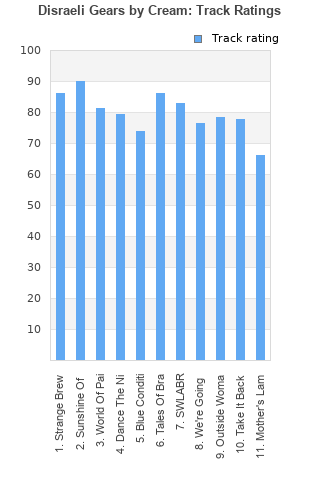 Rating metrics: Outliers can be removed when calculating a mean average to dampen the effects of ratings outside the normal distribution. This figure is provided as the trimmed mean. A high standard deviation can be legitimate, but can sometimes indicate 'gaming' is occurring. Consider a simplified example* of an item receiving ratings of 100, 50, & 0. The mean average rating would be 50. However, ratings of 55, 50 & 45 could also result in the same average. The second average might be more trusted because there is more consensus around a particular rating (a lower deviation).
(*In practice, some albums can have several thousand ratings)
This album is rated in the top 2% of all albums on BestEverAlbums.com. This album has a Bayesian average rating of 80.5/100, a mean average of 79.8/100, and a trimmed mean (excluding outliers) of 80.5/100. The standard deviation for this album is 13.9.

The best Cream album, sounds very influential and a lot of songs are great and catchy at the same time.

Although everything isn't excellent for me - the guitar work must have been such a standout at the time with a real modern guitar sound. Some excellent and timeless classic riffs

This is a really solid album. The problem with grading the album itself though lies in the gap between the best and worst tracks. The top tracks are remarkable, but there are several true skips.

The fact that this is ranked as the 11th album of 1967 speaks volumes about what a year that was.

A pretty great album! Some personal favourites are 'Sunshine of Your Love', 'Strange Brew', and 'SWLABR'.

Eric Clapton's increased contribution make this album what it is. His added vocals are a nice change of pace but it is the assault of guitars that dominate each of these concise songs. There are some sick riffs throughout and the playing is as clean as you can find. The album is a little lacking when it comes to improvisation but that is a creative choice.

Disraeli Gears is Creams most solid album.
The first four songs are excellent - two classics and two deep cuts.
Second side starts strong with Tales of Brave Ulysses - one of the masterpieces, followed by SWABLR (She Walks Like a Bearded Rainbow) and the classic blues standard Outside Woman Blues. The two Bruce songs on side two are just ok, despite his great singing they drag a little.

Blue Condition and Mothers Lament are obviously rubbish. Ginger Baker should not be given a microphone.

I'll probably upset a lot of people, but I think Eric Clapton is overrated. That said, this is a really good album, with consistently really good songs from start to finish. I'm just not blown away. Not that being really good is a bad thing.

Your feedback for Disraeli Gears