The Doors (studio album) by The Doors 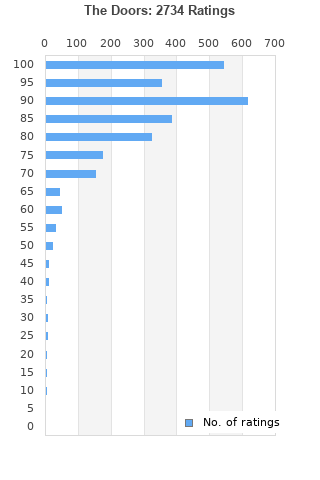 The Doors is ranked as the best album by The Doors.

Morrison Hotel- A Tribute to The Doors
The Winchester, Lakewood, United States. 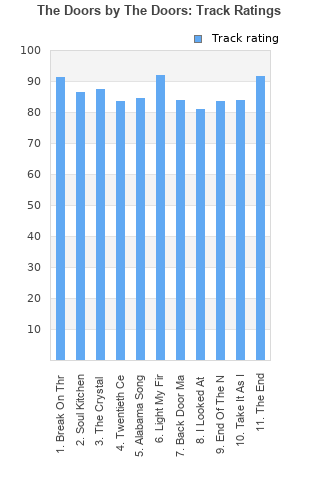 Rating metrics: Outliers can be removed when calculating a mean average to dampen the effects of ratings outside the normal distribution. This figure is provided as the trimmed mean. A high standard deviation can be legitimate, but can sometimes indicate 'gaming' is occurring. Consider a simplified example* of an item receiving ratings of 100, 50, & 0. The mean average rating would be 50. However, ratings of 55, 50 & 45 could also result in the same average. The second average might be more trusted because there is more consensus around a particular rating (a lower deviation).
(*In practice, some albums can have several thousand ratings)
This album is rated in the top 1% of all albums on BestEverAlbums.com. This album has a Bayesian average rating of 87.0/100, a mean average of 86.0/100, and a trimmed mean (excluding outliers) of 87.0/100. The standard deviation for this album is 13.2.

Unreal album of sexy, silky rock and roll with the best use of keyboard within a rock context of all time.

Must have been a great album when it dropped but listening to it nearly 55 years after was just ok for me.

Their debut is my favorite record by them. Kickass opener (Break On Through) a lot of great between (20th Century Fox, Soul Kitchen, Whisky Bar) with one high point (Light My Fire) and ending in the spectacular way with The End.

The Doors were capable of producing songs of the highest calibre. The End, Light My Fire and Break on Through are great examples. There are other tracks that rate quite highly but in comparison to the rest the one or two fillers are pretty ordinary. Take off the rose tinted glasses and see this album for what it is - a great solid debut album with a handful of excellent tracks but for me it just fails to be one of the all time greats.

Great album. The Doors are The Doors. One of a kind. 'The End' just oozing atmosphere. 'The Crystal Ship' is an under rated gem. Fine album right through.

So look, I know EVERYONE ever loves this record. I dig it, too! But I have to admit it doesn't quite hit as hard for me as other albums in this tier of objective "greatness." It has a lot of passion and the music is interesting, but I have to wonder if we love this album this much if we didn't lose Morrison the way that we did.

Your feedback for The Doors