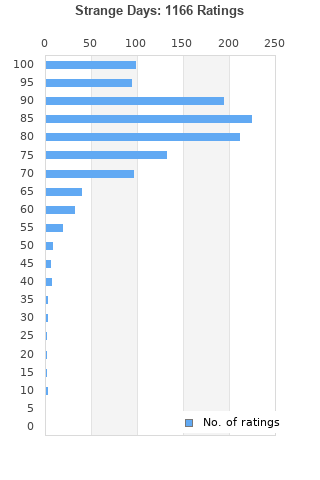 Strange Days is ranked 3rd best out of 40 albums by The Doors on BestEverAlbums.com.

The best album by The Doors is The Doors which is ranked number 29 in the list of all-time albums with a total rank score of 37,216. 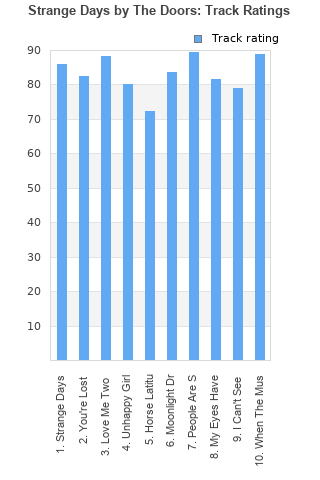 Rating metrics: Outliers can be removed when calculating a mean average to dampen the effects of ratings outside the normal distribution. This figure is provided as the trimmed mean. A high standard deviation can be legitimate, but can sometimes indicate 'gaming' is occurring. Consider a simplified example* of an item receiving ratings of 100, 50, & 0. The mean average rating would be 50. However, ratings of 55, 50 & 45 could also result in the same average. The second average might be more trusted because there is more consensus around a particular rating (a lower deviation).
(*In practice, some albums can have several thousand ratings)
This album is rated in the top 1% of all albums on BestEverAlbums.com. This album has a Bayesian average rating of 82.3/100, a mean average of 81.7/100, and a trimmed mean (excluding outliers) of 82.4/100. The standard deviation for this album is 12.5.

Rush released to capitalise on the success of ‘The Doors’ some 8 months after its release , ‘Strange Days’ unsurprisingly contains several songs that were written around the time of the former namely “My Eyes Have Seen You” and “Moonlight Drive” both circa 1965. Krieger manages to repeat his “Light My Fire” hit making with the wonderful “Love Me Two Times” initially banned on US radio for being too risqué

But truely they are all appetisers for the main course - the epic conclusion and iconic 10:28 “When the Musics Over” another of the tracks pre dating The Doors recording contract last seen in 1966 at the Whisky. When Morrison screams “Yeah !!!!!!!!” to open the track in sends shivers down my spine every time

One of my all time favourite albums. Just wish it was longer.
I Can't See Your Face In My Mind and My Eyes Have Seen You deserve so much more recognition. Also Unhappy Girl, which I'm surprised has such a low average rating.

Superb Sophomore album that is equal to their debut.Brilliantly produced and somewhat ahead of it's time.

Horse Latitudes prevents this Sophmore album from a higher rating.

Jim Morrison is an animal on this record. He is undeniable and legendary. Overall, the album is similar to The Doors debut but a little "stranger" sounding, pun intended. The keyboards are fantastic and the more heavy reliance on reverb makes for a more psychedelic feeling among the songs. It doesn't reach the peaks of the deubt but it is more consistent, in my eyes. The Doors were very much in their bag in 1967.

My personal favorite album by The Doors.

It’s much more experimental than their debut, it has a lot of new sounds and instrumentation : that is what I like the most. It’s also supported by the classics Love Me Two Times and People Are Strange, great songs.

The cohesion of the album is amazing: there is no filler, not even Horse Latitudes which I see as a interlude. Starts strong with the moody melodic Strange Days and ends perfectly with the amazing jam on When the Music’s Over.

Great catchy pop songs that you never tire of

Favorites: Love Me Two Times, People Are Strange, When The Music's Over.

Your feedback for Strange Days