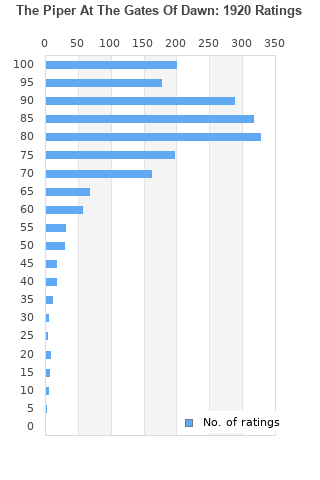 The Piper At The Gates Of Dawn is ranked 6th best out of 34 albums by Pink Floyd on BestEverAlbums.com.

The best album by Pink Floyd is The Dark Side Of The Moon which is ranked number 2 in the list of all-time albums with a total rank score of 94,022.

Listen to The Piper At The Gates Of Dawn on YouTube

The Piper At The Gates Of Dawn track list 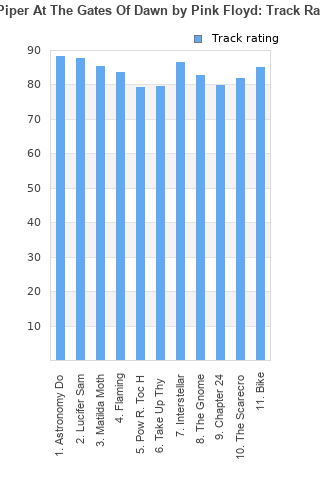 The Piper At The Gates Of Dawn rankings

The Piper At The Gates Of Dawn collection

The Piper At The Gates Of Dawn ratings

Rating metrics: Outliers can be removed when calculating a mean average to dampen the effects of ratings outside the normal distribution. This figure is provided as the trimmed mean. A high standard deviation can be legitimate, but can sometimes indicate 'gaming' is occurring. Consider a simplified example* of an item receiving ratings of 100, 50, & 0. The mean average rating would be 50. However, ratings of 55, 50 & 45 could also result in the same average. The second average might be more trusted because there is more consensus around a particular rating (a lower deviation).
(*In practice, some albums can have several thousand ratings)
This album is rated in the top 1% of all albums on BestEverAlbums.com. This album has a Bayesian average rating of 82.1/100, a mean average of 81.0/100, and a trimmed mean (excluding outliers) of 82.2/100. The standard deviation for this album is 15.0.

The Piper At The Gates Of Dawn favourites

The Piper At The Gates Of Dawn comments

It was a real pleasure listening to this album again especially to Astronomy Domine and Interstellar Overdrive which must be the first of something. But the genius of Syd Barrett shines on every single diamond on this album.

It's quality and uniqueness can't be denied, I never loved it tho.

A trip in Syd Barrett's beatiful mind, you can't miss it.

I never really latched onto Barrett-era Floyd, even in my younger, less conservative days. It's just all better from here.

A fantastic debut that took me some time to appreciate. The Floyd are probably my favorite band and definitely the band that my ears have spent the most time with but the stereo version of Piper never really took a hold of me. I've always liked "Astronomy Domine", "Flaming", "Interstellar Overdrive" and "Bike" but the other songs never clicked with me until I heard the mono. In fact, the previously mentioned songs are the only ones that I'd prefer the stereo version over the mono. I'm conflicted on "Interstellar Overdrive" because the two are mixes are so different. The stereo version sounds much more grandiose but the organ is a nice addition on the mono track. The phasing is what tips my opinion in favor of the stereo. Even if it is a bit sloppy, I'm accustomed to it and I think it adds a whole other dimension to the recording. Regardless of the mix, the album is a landmark moment for psychedelia. There isn't any contemporary music that it can be adequately compared to. It is too technically sound to be compared to The Red Krayola or the like and too weird to be compared to something along the lines of the Beatles. I guess, it's a little like The Doors debut but that's inadequate because there a distinct lack of ego that Jim Morrison embodies for them (that is not meant in a bad way at all). Syd is incredible on this album but not in any way similar to Jim Morrison. His guitar is magnificent, unbelievably creative and the songs are unique in that they could only come from his mind-palace. Everyone else is fantastic too, especially Rick Wright. The album would not be close to what it is without the eclectic sound that he brings. The bit between "Interstellar Overdrive" and "Bike" is a little underwhelming.

Fact: You will never hear anything like this again. Whether that's a good thing or not is up to you, but I think the odds are strongly in favour of your jaw dropping.
As a kid, my brain exploded listening to this.

Your feedback for The Piper At The Gates Of Dawn