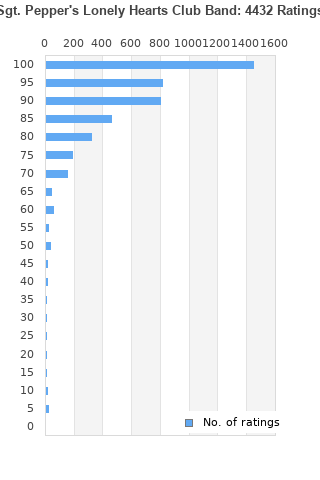 Sgt. Pepper's Lonely Hearts Club Band is ranked 3rd best out of 66 albums by The Beatles on BestEverAlbums.com.

The best album by The Beatles is Abbey Road which is ranked number 3 in the list of all-time albums with a total rank score of 75,666. 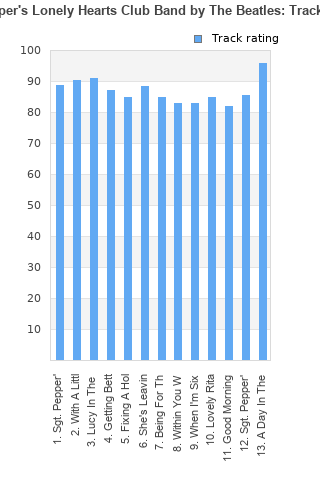 Rating metrics: Outliers can be removed when calculating a mean average to dampen the effects of ratings outside the normal distribution. This figure is provided as the trimmed mean. A high standard deviation can be legitimate, but can sometimes indicate 'gaming' is occurring. Consider a simplified example* of an item receiving ratings of 100, 50, & 0. The mean average rating would be 50. However, ratings of 55, 50 & 45 could also result in the same average. The second average might be more trusted because there is more consensus around a particular rating (a lower deviation).
(*In practice, some albums can have several thousand ratings)
This album is rated in the top 1% of all albums on BestEverAlbums.com. This album has a Bayesian average rating of 90.5/100, a mean average of 89.1/100, and a trimmed mean (excluding outliers) of 90.5/100. The standard deviation for this album is 14.2.

You know, I've heard this album's art many many times. I thought I heard everything there is to here about this album. In the last 5 years I became a musician and I came back to this album hearing it as a musician rather than just artistic vibes and atmospheres. This album fucking blew my mind when I heard it as a musician. The music is very well written and the melodies are great on Lucy in the Sky with Diamonds. The way the compositions are written are well with some satisfaction like on She's Leaving Home. And last, the chord progressions are good on A Day In The Life. It has everything a musician should be looking for in music. Among other albums, this one is to study. You wanna make good music? I wouldn't start here because it's too complex to study but this one is definitely something you NEED to come back to learn. In my opinion, the songwriting is awesome on this project and it amazes me that everyone who says album is good (because of that reason). But nobody has explicitly said to me as a musician, this is something you should study. It's good music but the vibes, atmospheres, and art needs some work. I do however give this album a high rating for the reasons other than art. The lyrics aren't the worse but they are not for the scholarly. For the greatest album of all time on many lists, I did expect more for lyrics...

Quite simply the finest collection of songs ever put on record. It is absolutely flawless with elements of fun, charisma and technical finesse that is very rarely matched. The Beatles are very often at their very best, this one just edges it for me.

I love the concept of Beatles changing idendity to Sgt. Peppers. The album is flawless, and even though the second side has some songs which i would consider sub par for Beatles, it fits with the theme. And the ending with the reprise of Sgt. Peppers and the best album ender with "A day in the life". It doesnt have the high-points which the white album has, or the hits like Abbey Road, but the album as a whole is the best done of all of them. 100/100

Not so sure if to put it as my favourite Beatles album, but... A Day in Life takes it all... it's the summary of the meaning of perfect music.

Like star ratings matter in this case. She's Leaving Home is so stunning...

Everything is great about this album, there are a couple of duds but I accept them as they work will with the rest. This is not the best album by The Beatles, but it works really well as a whole and has a handful of greatest psychedelic pop songs. Also it has one of the better endings I heard.

It has some good moments, as all Beatles albums do, but this album isn't that special for me. Highlights are title track, With A Little Help From My Friends, Lucy In The Sky With Diamonds and A Day In The Life, but personally I can't see what all the fuss is about overall.

This album features easily the greatest closer in the history of albums with "A Day in the Life," possibly the greatest song ever written and produced.

Just amazing and beautiful throughout.