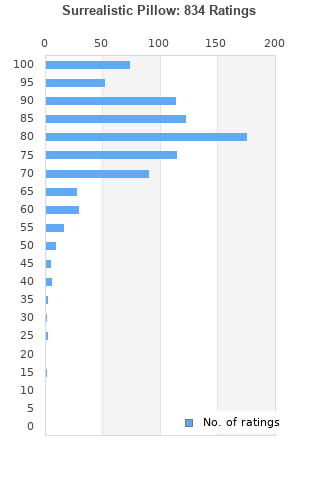 Surrealistic Pillow is ranked as the best album by Jefferson Airplane. 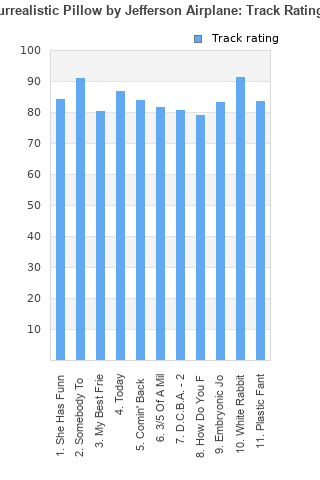 Rating metrics: Outliers can be removed when calculating a mean average to dampen the effects of ratings outside the normal distribution. This figure is provided as the trimmed mean. A high standard deviation can be legitimate, but can sometimes indicate 'gaming' is occurring. Consider a simplified example* of an item receiving ratings of 100, 50, & 0. The mean average rating would be 50. However, ratings of 55, 50 & 45 could also result in the same average. The second average might be more trusted because there is more consensus around a particular rating (a lower deviation).
(*In practice, some albums can have several thousand ratings)
This album is rated in the top 1% of all albums on BestEverAlbums.com. This album has a Bayesian average rating of 80.9/100, a mean average of 80.3/100, and a trimmed mean (excluding outliers) of 81.0/100. The standard deviation for this album is 12.6.

Great psychedelic pop/rock and White Rabbit sounds like a masterpiece.

A great representative of the west coast music style. It still has that folksy element, but JP is clearly moving towards more psychedelic rock elements.
Track picks White Rabbit, Today, Somebody to Love, How do you feel.
So not so bad for a second album which quite soon became an essential part of the 1967 movement.

I like it for White Rabbit. The rest I can take or leave.

I'm glad Jefferson Starship has a place this high on the chart, because although this music is not for everybody, it is super cool.

A surprisingly dynamic album. There's aggressive moments like on Somebody to Love, and then there's moments of tranquility like on Comin' Back to Me. I love White Rabbit, the way it builds, releases, and it ends abruptly. It was also really influential to the burgeoning San Francisco psychedelic rock scene.

In some ways, this album is the beginning of the end of what was good about 1960s San Francisco's musical influence. But it's a grand pronouncement to the world.

2 smash hits of all time. the rest bluesy jazzy stuff

Best tracks: Somebody to Love, How Do You Feel, White Rabbit
Worst tracks: She Has Funny Cars, Comin Back to Me, 3/5 of a Mile in 10 Seconds

A landmark album for psychedelic music with iconic songs like “Somebody to Love” and “White Rabbit”. Outside of those two songs there is a decent amount of substance to the record but there are also some songs that get stale after a few listens. The album’s influence can’t be questioned.

Absolutely amazing album. It's considerably underrated everywhere.
When you listen through the whole album and get to White Rabbit it feels like this song is the best music piece ever made.

Your feedback for Surrealistic Pillow