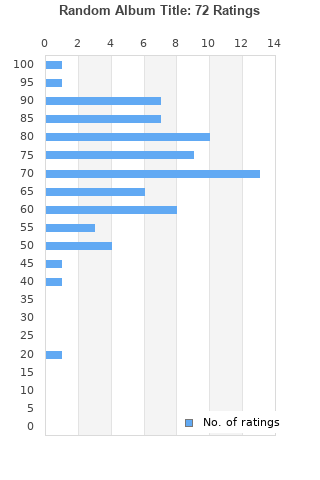 Deadmau5 - Random Album Title - Deadmau5 CD TGVG The Fast Free Shipping
Condition: Very Good
Time left: 17d 20h 49m 27s
Ships to: Worldwide
$19.89
Go to store
Product prices and availability are accurate as of the date indicated and are subject to change. Any price and availability information displayed on the linked website at the time of purchase will apply to the purchase of this product.  See full search results on eBay

Random Album Title is ranked 2nd best out of 12 albums by deadmau5 on BestEverAlbums.com.

The best album by deadmau5 is while(1<2) which is ranked number 3818 in the list of all-time albums with a total rank score of 371. 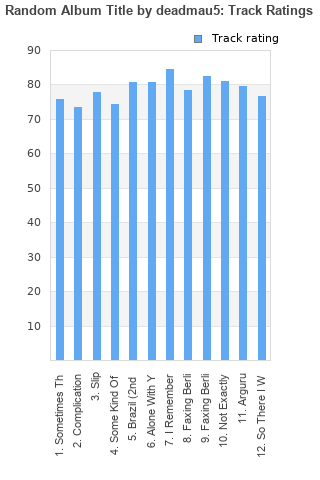 Rating metrics: Outliers can be removed when calculating a mean average to dampen the effects of ratings outside the normal distribution. This figure is provided as the trimmed mean. A high standard deviation can be legitimate, but can sometimes indicate 'gaming' is occurring. Consider a simplified example* of an item receiving ratings of 100, 50, & 0. The mean average rating would be 50. However, ratings of 55, 50 & 45 could also result in the same average. The second average might be more trusted because there is more consensus around a particular rating (a lower deviation).
(*In practice, some albums can have several thousand ratings)
This album has a Bayesian average rating of 72.7/100, a mean average of 71.8/100, and a trimmed mean (excluding outliers) of 72.6/100. The standard deviation for this album is 14.2.

An astounding achievement. His most competent and compelling release. 72 minutes of absolute dance perfection, characterised by its minimalist aesthetic, late-night low sound and gorgeous production.

As if that wasn't good enough, the consistency in its quality is almost unparalleled for dance music, and most certainly for house music. Opens strongly, builds to a fantastic middle section and ends perfectly. It's like one pre-packaged party on an album.

The only qualm I have with it is that the full version of Faxing Berlin is on there, yet the only reason I'm angry about that is because Faxing Berlin is such an incredible song. Its mere inclusion on this album is enough to raise the rating a little, so I can't really complain.

What you have here is at once both textbook deadmau5 and genre-defining music in the realm of Progressive House. Remains one of the most engaging and well made dance records I've ever heard. A must-listen for all EDM fans out there.

Random Album Title was the album where deadmau5 discovered his signature sound. Every song is endlessly danceable, while each doing something new. The first two tracks work together seemlessly, "Slip" is one of my favourite dance tracks ever, "I Remember" is a great emotional track, and "Faxing Berlin" (especially with the piano intro) is one of mau5's best tracks. The first ture deadmau5 album, and one of his best.

Your feedback for Random Album Title