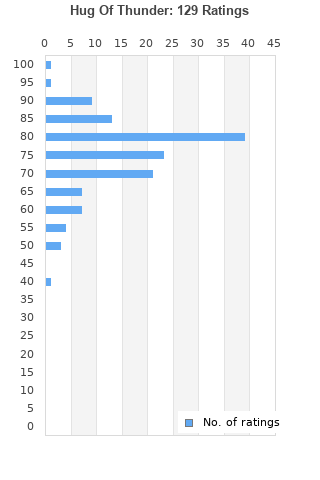 Hug of Thunder by Broken Social Scene (CD)
Condition: Like New
Time left: 1d 12h 29m 41s
Ships to: Worldwide
$8.00
Go to store
Product prices and availability are accurate as of the date indicated and are subject to change. Any price and availability information displayed on the linked website at the time of purchase will apply to the purchase of this product.  See full search results on eBay

Hug Of Thunder is ranked 4th best out of 10 albums by Broken Social Scene on BestEverAlbums.com.

The best album by Broken Social Scene is You Forgot It In People which is ranked number 271 in the list of all-time albums with a total rank score of 7,331. 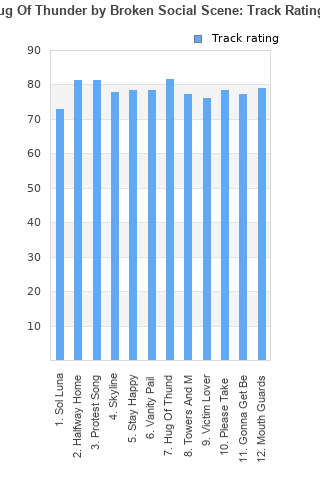 Rating metrics: Outliers can be removed when calculating a mean average to dampen the effects of ratings outside the normal distribution. This figure is provided as the trimmed mean. A high standard deviation can be legitimate, but can sometimes indicate 'gaming' is occurring. Consider a simplified example* of an item receiving ratings of 100, 50, & 0. The mean average rating would be 50. However, ratings of 55, 50 & 45 could also result in the same average. The second average might be more trusted because there is more consensus around a particular rating (a lower deviation).
(*In practice, some albums can have several thousand ratings)
This album is rated in the top 12% of all albums on BestEverAlbums.com. This album has a Bayesian average rating of 75.6/100, a mean average of 75.8/100, and a trimmed mean (excluding outliers) of 75.8/100. The standard deviation for this album is 9.7.

Everybody is back! Loved hearing everybody contributing on this album, Feist, Amy and Emily. Ariel Engle did great live filling in, and on her own songs. Saw them a few days after Gord Downie died and Kevin Drew soldiered on but with a couple of rough patches and a walk off stage, but came back strong. Tough night but we (the crowd) needed the music.
Just love the album and the vinyl comes with a bonus tune.

2017 has been a shit show. If ever an album were to save us with a glimmer of genuine hope, Broken Social Scene's Hug of Thunder is the one to do it. This is a big, bright, beautiful beacon, and I'm glad it exists.

Broken Social Scene goes for a big sound, especially in the first half. These guys have quietly built quite the discography. In many ways, this sounds like what Arcade Fire meant to do.

This album is really excellent, even if it dips a little in the second half. Definitely a return to form after so long.

Your feedback for Hug Of Thunder