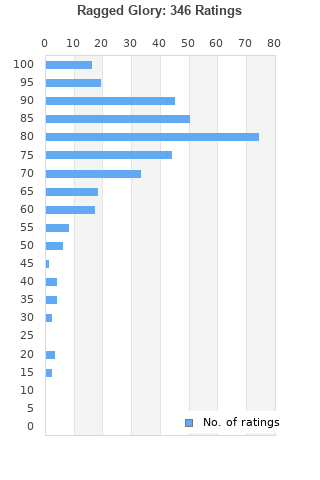 Ragged Glory is ranked 4th best out of 23 albums by Neil Young & Crazy Horse on BestEverAlbums.com.

The best album by Neil Young & Crazy Horse is Everybody Knows This Is Nowhere which is ranked number 211 in the list of all-time albums with a total rank score of 8,637.

In Her Own Words & Capstan
Vinyl, Atlanta, United States. 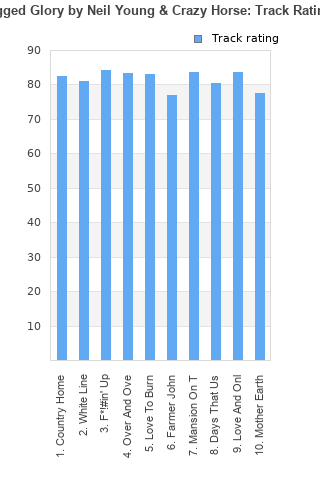 Rating metrics: Outliers can be removed when calculating a mean average to dampen the effects of ratings outside the normal distribution. This figure is provided as the trimmed mean. A high standard deviation can be legitimate, but can sometimes indicate 'gaming' is occurring. Consider a simplified example* of an item receiving ratings of 100, 50, & 0. The mean average rating would be 50. However, ratings of 55, 50 & 45 could also result in the same average. The second average might be more trusted because there is more consensus around a particular rating (a lower deviation).
(*In practice, some albums can have several thousand ratings)
This album is rated in the top 3% of all albums on BestEverAlbums.com. This album has a Bayesian average rating of 78.2/100, a mean average of 77.2/100, and a trimmed mean (excluding outliers) of 78.4/100. The standard deviation for this album is 15.1.

Ragged Glory is back to basics collaboration with Crazy Horse. Neil beings a solid set of songs and the ensemble keeps the melodies and choruses simple, allowing some extended jams that do not stray too far from the melody and do not go on too long.

Young borrows the melody from The River is Wide for the closer Natural Anthem. The 1959 Don and Dewey cover of Farmer John is excellent too.

One of the best Crazy Horse albums. Highly recommended.

A Side: Mansion on the Hill
B Side: Days That Used to Be

A return to form! At last! I thought it would never come. Ragged Glory is rowdy, boisterous, loud, and raw. Ragged Glory might be the most perfect album name ever, it describes the music so perfectly it's almost scary. Some of the songs might seem like a taxing listen when you look at the track list and see two 10 minute songs. But the free flowing nature of this record really lets these tracks fly by. An absolute must for any fan of garage rock and Neil Young.

A raw effort from Neil Young and one of his most fun collabs with Crazy Horse. It just sounds like a group of friends that got together and recorded an album. It ends up being surpringly timely since grunge was about to explode. This is among the albums that are a key part of Young's critical rebound in the 90s.

Favorite Tracks:Love To Burn, Days That Used To Be

It is a above average album. I Believe Neil created is best music in the seventies, and their is no great songs on the album. Apart from FARMER JOHN the rest of the tracks are reasonable uplifting.

A typical rock'n'roll guitar album from the Crazy horse. Ragged glory, has a great live feel and is easily Neil Young's best record in over a decade. Some enjoyable songs here in, f*!#in' up, over and over, and, love and only love. The band are clearly enjoying themselves and in turn the listener cannot fail to be sucked into that atmosphere. Not amazing musically, but hey, it's only rock'n'roll.

Your feedback for Ragged Glory