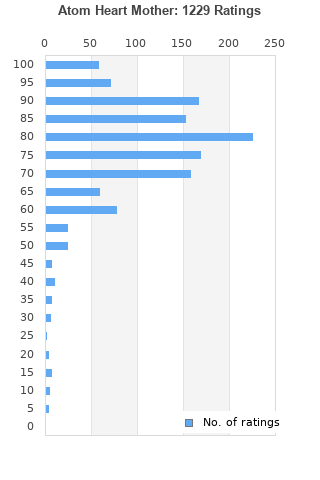 Atom Heart Mother is ranked 8th best out of 35 albums by Pink Floyd on BestEverAlbums.com.

The best album by Pink Floyd is The Dark Side Of The Moon which is ranked number 2 in the list of all-time albums with a total rank score of 91,293. 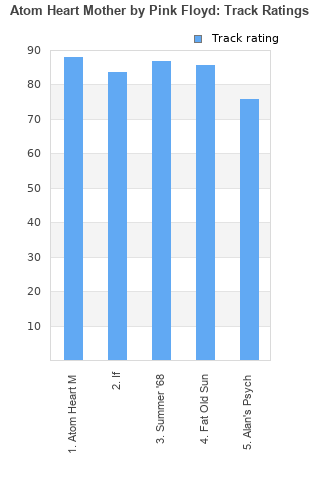 Rating metrics: Outliers can be removed when calculating a mean average to dampen the effects of ratings outside the normal distribution. This figure is provided as the trimmed mean. A high standard deviation can be legitimate, but can sometimes indicate 'gaming' is occurring. Consider a simplified example* of an item receiving ratings of 100, 50, & 0. The mean average rating would be 50. However, ratings of 55, 50 & 45 could also result in the same average. The second average might be more trusted because there is more consensus around a particular rating (a lower deviation).
(*In practice, some albums can have several thousand ratings)
This album is rated in the top 3% of all albums on BestEverAlbums.com. This album has a Bayesian average rating of 78.0/100, a mean average of 77.0/100, and a trimmed mean (excluding outliers) of 78.0/100. The standard deviation for this album is 14.8.

Not a goto Floyd album for me but there's some great moments, particularly the title track and Summer '68.

"Psychedelic breakfast" drags on for too long, but the rest is very good

While there isn't really a theme or flow to this album, unlike Pink Floyd's most famous albums, Atom Heart Mother is a very enjoyable piece of music. The highlights for me are the title track, If, and Summer of '68. I would also say that Alan's Psychedelic Breakfast is rated lower than it should be. In fact, I'd say that having this album bookended by two, longer instrumental pieces is the most interesting aspect of Atom Heart Mother.

I'll never forget when my brain had a conference call with Orange Barrel and Atom Heart Mother on the same night. To this day, I can see those three cows from the back cover staring at me.

I never realized that Pink Floyd apparently had quite a bit of influence on Twee Pop, including Belle & Sebastian (one of my favorite bands). Atom Heart Mother is case in point. Summer of 68, with it's chipper, whispered cadence and baroque horns, sounds like it could have been on any B&S album. It's uncanny. The other 2 tracks are not far behind. The opening and closing tracks are epic, glorious psychedelia, but let's just say not everyone's cup of English Breakfast ;)

Straight up incredible. I've just realized that I left the comment for the album in the wrong place, so just gonna copy it over here:
What a glorious album. It's discordant yet melodious, featuring distant melodies being overpowered by discordant overlayed progressions. It's reflective and otherworldly all at the same time. The dreamy, floaty chords, Gilmour's glassy solos and choral melodies and orchestral layers just make it so sophisticated and yet so simple. It's like directly getting a slice out of someone's mind. I just love it so.

Side 2 is highlighted by "Summer 68" about a groupie encounter followed by Waters nice ballad "If" . Sadly "Fat Old Sun " and "Psychedelic Breakfast" are both terrible with the latter literally a geezer cooking breakfast muttering garbage to himself

I followed the lead of a previous poster who recommended checking out a live version of "Atom Heart Mother" (I went for Live in Montreux 1970) & even though it didn't have the recorded version Choir and brass I really enjoyed it , its almost a completely different song and is very powerful and 100% awesome. I would strongly recommend it !

Not sure why this album's rated so low. This was fantastic!

Your feedback for Atom Heart Mother