Roll The Bones (album) by Rush 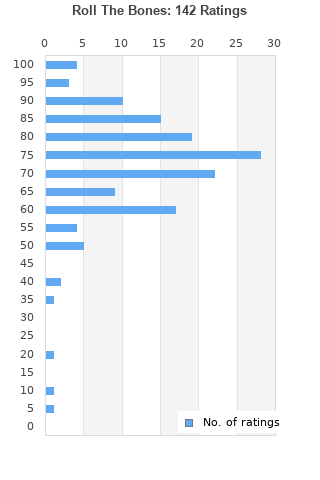 Roll The Bones is ranked 15th best out of 35 albums by Rush on BestEverAlbums.com.

The best album by Rush is Moving Pictures which is ranked number 153 in the list of all-time albums with a total rank score of 12,161. 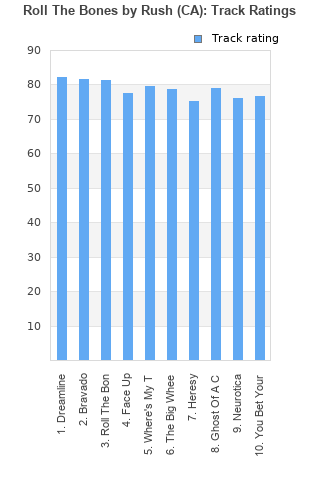 Rating metrics: Outliers can be removed when calculating a mean average to dampen the effects of ratings outside the normal distribution. This figure is provided as the trimmed mean. A high standard deviation can be legitimate, but can sometimes indicate 'gaming' is occurring. Consider a simplified example* of an item receiving ratings of 100, 50, & 0. The mean average rating would be 50. However, ratings of 55, 50 & 45 could also result in the same average. The second average might be more trusted because there is more consensus around a particular rating (a lower deviation).
(*In practice, some albums can have several thousand ratings)
This album is rated in the top 17% of all albums on BestEverAlbums.com. This album has a mean average rating of 73.0/100. The trimmed mean (excluding outliers) is 75.1/100. The standard deviation for this album is 16.3.

Although, not one of my very favorite Rush records, it would probably crack top ten at this point. I feel it gets a bad rep and is underrated. Some very good material here that I was happy to see kept in the live rotation all the way up til the end.

Bravado is absolutely stunning and Where's My Thing has always been one of my favorite Rush instrumentals.

I loved this record when it came out. The only bad bit of this record is the "rap" in the title track. The whole sound becomes more balanced as they hit this point. Guitars, Drums, Bass and Synths all working together brilliantly. Where's My Thing and The Big Wheel are classic Rush. Then there's Ghost Of A Chance. Absolute class

This album sits in a far lower position than it should (well it does in 2020). There aren't any tracks which I don't like. 'Roll the Bones', 'Dreamline' and 'Ghost of a Chance' are the highlights for me. This album and Grace Under Pressure get the most listens out of my Rush collection.

Is there any dissapointing Rush-Album? Here you find outstanding Songs like Dreamline, Bravado & Ghost of a Chance...

Everyone who dislikes this thing because of the rapping part in Roll the Bones isn't really a Rush fan. The trio loves and incorporates so much different genres in their music that this shouldn't come as a surprise. They're the coolest guys. Vastly underrated album...

This is a truly underrated gem in the Rush discography. while it may lack the epic songs Rush is known for, each one of these twelve cuts is skilfully crafted and contains insightful lyrics presented with Rush's usual exemplary musicianship.

The three guys play excellent, again. It's a pleasure just to listen to the instruments and not mind the songs, although there are some pretty good ones on this album.

5 great tracks imo. Dreamline, Bravado, Roll The Bones, Gost Of A Chance & The Big Wheel. I could do without the rest of the tracks though. MEZ

Your feedback for Roll The Bones