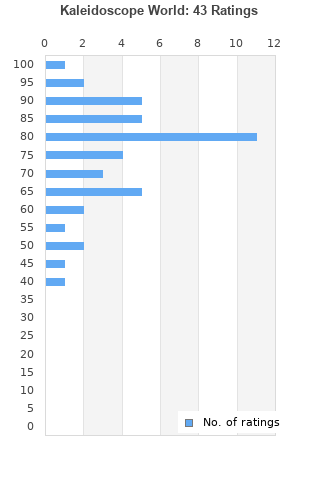 Kaleidoscope World is ranked as the best album by The Chills. 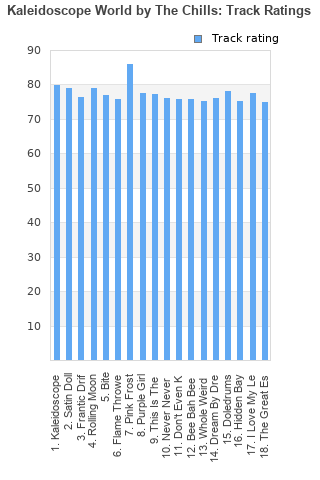 Rating metrics: Outliers can be removed when calculating a mean average to dampen the effects of ratings outside the normal distribution. This figure is provided as the trimmed mean. A high standard deviation can be legitimate, but can sometimes indicate 'gaming' is occurring. Consider a simplified example* of an item receiving ratings of 100, 50, & 0. The mean average rating would be 50. However, ratings of 55, 50 & 45 could also result in the same average. The second average might be more trusted because there is more consensus around a particular rating (a lower deviation).
(*In practice, some albums can have several thousand ratings)
This album is rated in the top 9% of all albums on BestEverAlbums.com. This album has a Bayesian average rating of 75.6/100, a mean average of 76.3/100, and a trimmed mean (excluding outliers) of 76.3/100. The standard deviation for this album is 13.1.

Interesting band. Mixed bag. 'I Love My Leather Jacket' being best track on it. Some good ones (Kaleidoscope World, Pink Frost, Doledrums) but overall I find the majority of songs pretty average and slightly blending into each other.

I actually own the original 8 track 12” release of ‘Kaleidoscope World’ on vinyl and it remained one of my all time favourites for a very long time. It wasn’t until much later on I discovered it was actually a compilation of early of EP’s and singles

A delicious slice of Kiwiana. Includes the all-time NZ classic "Pink Frost". Mandatory listening for any of us colonials.

This is a great album. I don't know anybody else who has this album.

The Chills are pure pop at its very best - simple melodies and bittersweet lyrics. I love this album and I think it is at least partly responsible for me moving to NZ..

Your feedback for Kaleidoscope World