Offerings (studio album) by Typhoon (US) 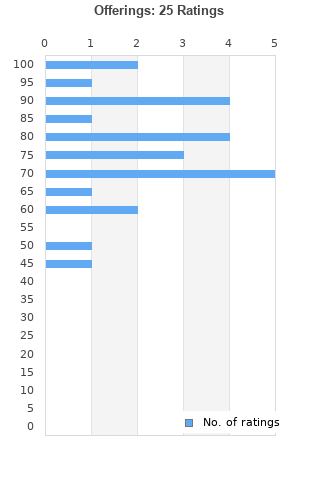 Typhoon | CD | Offerings
Condition: Good
Time left: 4d 17h 15m 6s
Ships to: Worldwide
£5.98
Go to store
Product prices and availability are accurate as of the date indicated and are subject to change. Any price and availability information displayed on the linked website at the time of purchase will apply to the purchase of this product.  See full search results on eBay

Offerings is ranked as the best album by Typhoon (US). 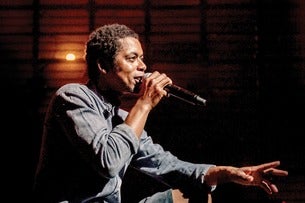 Tickets from Ticketmaster Get tickets
May
02
Mon
19:00 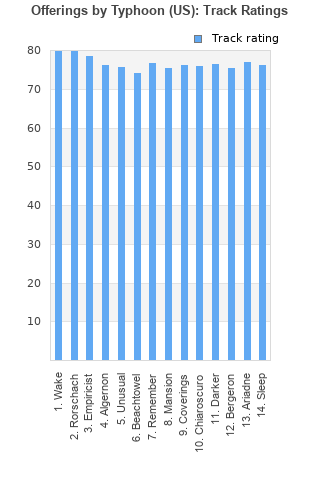 Rating metrics: Outliers can be removed when calculating a mean average to dampen the effects of ratings outside the normal distribution. This figure is provided as the trimmed mean. A high standard deviation can be legitimate, but can sometimes indicate 'gaming' is occurring. Consider a simplified example* of an item receiving ratings of 100, 50, & 0. The mean average rating would be 50. However, ratings of 55, 50 & 45 could also result in the same average. The second average might be more trusted because there is more consensus around a particular rating (a lower deviation).
(*In practice, some albums can have several thousand ratings)
This album is rated in the top 17% of all albums on BestEverAlbums.com. This album has a Bayesian average rating of 75.1/100, a mean average of 75.8/100, and a trimmed mean (excluding outliers) of 75.8/100. The standard deviation for this album is 13.2.

The making of this album is one of my favorite stories in recent memory of a collaborative creative process involving both the artist and their fans. The Portland, Oregon, based band first created a draft version of the album, and then held several listening events in various locations in the country where fans could hear the songs, offer their feedback, and sometimes have their suggestions incorporated into the released version of the album. I think that's an incredibly creative and generous gift for a band to offer its fans. The result is a surprisingly personal rumination on the collective, societal result of cultural memory loss, the kind of historical forgetting that could lead a country like the United States to elect a carnival barker like Donald Trump to be its president. It's a dark, disturbing vision, to be sure, but also one infused with hope. An absolutely brilliant, artistically and intellectually complicated album that seems to have gotten lost in the shuffle of all that was happening in the worlds of both music and politics in the frenetic year of 2018.

The darker edge the band needed, most underrated album of the year

Your feedback for Offerings