Tell Me How You Really Feel (studio album) by Courtney Barnett 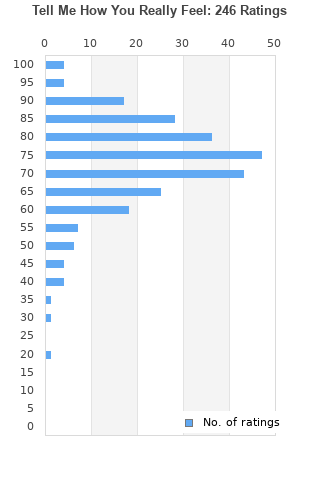 Courtney Barnett RSD 2019 Vinyl LP + Signed Card /Tell Me How You Really Feel LP
Condition: New
Time left: 20h 13m 33s
Ships to: Worldwide
$60.00
Go to store
Product prices and availability are accurate as of the date indicated and are subject to change. Any price and availability information displayed on the linked website at the time of purchase will apply to the purchase of this product.  See full search results on eBay

Tell Me How You Really Feel is ranked 2nd best out of 8 albums by Courtney Barnett on BestEverAlbums.com.

The best album by Courtney Barnett is Sometimes I Sit And Think, And Sometimes I Just Sit which is ranked number 481 in the list of all-time albums with a total rank score of 3,978.

Listen to Tell Me How You Really Feel on YouTube 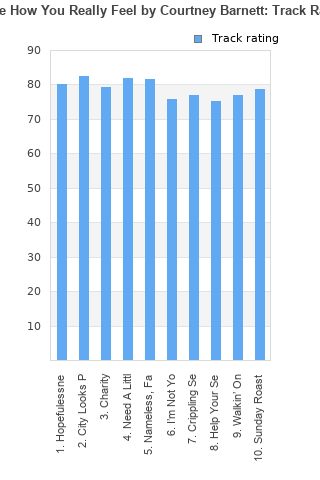 0
7.
Crippling Self Doubt And A General Lack Of Self-Confidence
Rating: 77 (50 votes)Comments:

Tell Me How You Really Feel rankings

Tell Me How You Really Feel collection

Tell Me How You Really Feel ratings

Rating metrics: Outliers can be removed when calculating a mean average to dampen the effects of ratings outside the normal distribution. This figure is provided as the trimmed mean. A high standard deviation can be legitimate, but can sometimes indicate 'gaming' is occurring. Consider a simplified example* of an item receiving ratings of 100, 50, & 0. The mean average rating would be 50. However, ratings of 55, 50 & 45 could also result in the same average. The second average might be more trusted because there is more consensus around a particular rating (a lower deviation).
(*In practice, some albums can have several thousand ratings)
This album has a Bayesian average rating of 74.0/100, a mean average of 73.5/100, and a trimmed mean (excluding outliers) of 74.1/100. The standard deviation for this album is 12.7.

Tell Me How You Really Feel favourites

Tell Me How You Really Feel comments

The album grows and grows on you, and after a while you'll even start appreciating the slow tracks towards the back of the album. Honest and witty lyrics, beautiful voice, accessible music: great album.

While there are certainly some interesting ideas introduced in this album, Barnett's lack of emotional range pulls everything down.

Her best album so far!

The songwriting is a little more direct, a little more spare on the wry, everyday details that made her first record such a total delight, but Courtney Barnett and her band's talent is still well evident here - the deceivingly jaunty 'Nameless Faceless' is an absolutely crushing, impassioned rally-cry for the rights of women to simply walk through the park at night. those little glimpses Barnett provides into depressingly everyday fears are sharp and tragic. The strength of a lot of these songs makes up for a somewhat difficult second album.

Definitely not as immediate as her first one, but the songwriting is pretty solid. She's got a great ear for a hook, and lyrically this is introspective and sober for the most part. The production brings the songs to the foreground, which feels appropriate. It'll be interesting to see if Courtney expands her musical palette next time.

I like the album. As a stand alone piece of music its a good deadpan indie rock record. But as a follow up to Sometimes I Sit & Think.. I just see no growth. Which I won't necessarily hold against her, since its not a bad sounding album either way and an artist doesn't always need to find a new sound with every album. Its just less exciting and doesn't really invoke many emotions in me.
I hope the fans don't abandon her and stick around for the next release.

Australia's own Courtney Barnett went from playing pubs to world consciousness and Ellen appearances within a few months following 2015's commercial and critical smash 'Sometimes I Sit and Think....' . So the follow up was always going to be interesting

I can split the album into 2 parts: tracks 1 to 6 are rather excellent with "Hopefulness" opening things perfectly as it builds to a crescendo , "City Looks Pretty" and its catchy hooks , "Charity" , single "Need A Little Time" , "Nameless , Faceless" and the Riot Grrl inspired rocker "I'm Not Your Mother... "

This one's darker in tone than previous releases. I don't know if that suits her well. There is a lack of big songs compared to Sometimes I Sit...

Really rather like this. 1st album I've bought by her (on a recommendation) and will be looking out for others.

Your feedback for Tell Me How You Really Feel