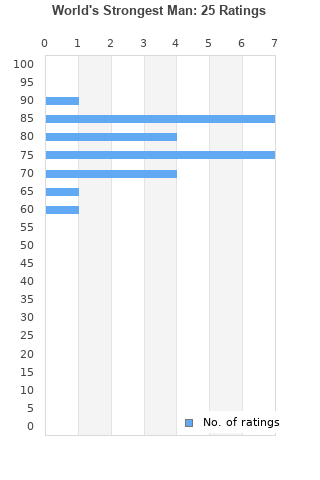 World's Strongest Man is ranked as the best album by Gaz Coombes. 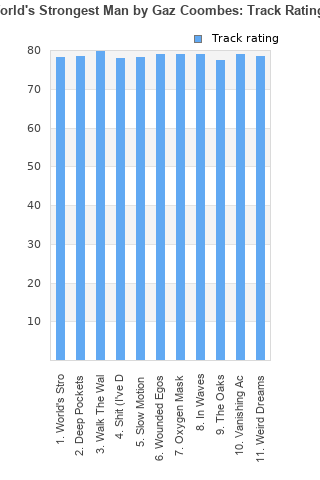 Rating metrics: Outliers can be removed when calculating a mean average to dampen the effects of ratings outside the normal distribution. This figure is provided as the trimmed mean. A high standard deviation can be legitimate, but can sometimes indicate 'gaming' is occurring. Consider a simplified example* of an item receiving ratings of 100, 50, & 0. The mean average rating would be 50. However, ratings of 55, 50 & 45 could also result in the same average. The second average might be more trusted because there is more consensus around a particular rating (a lower deviation).
(*In practice, some albums can have several thousand ratings)
This album is rated in the top 6% of all albums on BestEverAlbums.com. This album has a Bayesian average rating of 76.3/100, a mean average of 77.7/100, and a trimmed mean (excluding outliers) of 77.7/100. The standard deviation for this album is 7.6.

Solid album of an underrated artist

The sound and quality of the record is great. It took a little while to settle with the album in comparison with Matador. It felt inconsistent at first, but at the end I am very satisfied with the record and really feel the progress Gaz Coombes has made as a songwriter.

Just heard a track off this album (Walk the Walk) on the radio and my immediate thought was, ‘has Thom Yorke collaborated on something I wasn’t aware of?’ I quite liked the vibe of the track so now I’m going to give the whole album a spin. Was not surprised to see the comments below comparing the 2 artists.

Heavily underrated but brilliant artist. This is is best album till now!

Yeah he definitely sounds a bit like ol' Thom on a few tracks here, particularly in his falsetto register, but his band's sound and the album's production is not really very Radiohead. The production reminds me more of Beck's album Modern Guilt with its occasionally surf-style fuzzy guitars and snappy funk grooves. The melodies aren't as angular as Radiohead's post-OK Computer tunes either, and that makes these songs sound relatively more conventional. My favourite tracks on here are the ones that groove the most: Deep Pockets, The Oaks and Walk the Walk.

1st listen as i’m Typing this and really liking the vibe. Radiohead? I can see that enalogy. As i’m A big Radiohead fan don’t mind that comparison at all.

Radiohead? Well, they too hail from Oxford, so there might be some geographical element to it, cultural background or whatever. Anyway, I've always enjoyed Supergrass way more than Radiohead, and that's a euphemism. This is dark and entertaining in one stroke, not just yawn-inducing.

Your feedback for World's Strongest Man