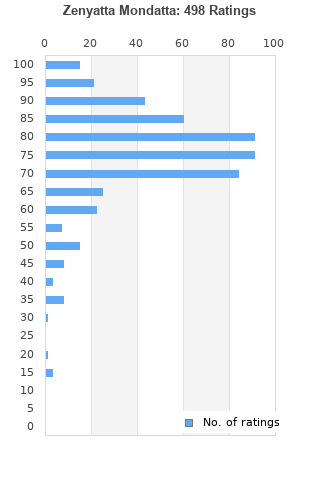 THE POLICE ZENYATTA MONDATTA LP 1980 ORIGINAL PRESS GREAT CONDITION! VG++/VG+!!B
Condition: Used
Time left: 2h 43m 45s
Ships to: Worldwide
$10.99
Go to store
Product prices and availability are accurate as of the date indicated and are subject to change. Any price and availability information displayed on the linked website at the time of purchase will apply to the purchase of this product.  See full search results on eBay

Zenyatta Mondatta is ranked 5th best out of 12 albums by The Police on BestEverAlbums.com.

The best album by The Police is Synchronicity which is ranked number 336 in the list of all-time albums with a total rank score of 5,897. 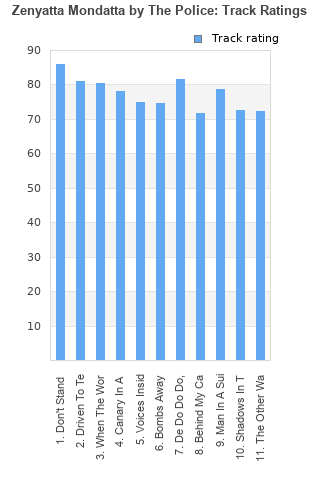 0
3.
When The World Is Running Down, You Make The Best Of What's Still Around
Rating: 79 (78 votes)Comments:

Rating metrics: Outliers can be removed when calculating a mean average to dampen the effects of ratings outside the normal distribution. This figure is provided as the trimmed mean. A high standard deviation can be legitimate, but can sometimes indicate 'gaming' is occurring. Consider a simplified example* of an item receiving ratings of 100, 50, & 0. The mean average rating would be 50. However, ratings of 55, 50 & 45 could also result in the same average. The second average might be more trusted because there is more consensus around a particular rating (a lower deviation).
(*In practice, some albums can have several thousand ratings)
This album is rated in the top 12% of all albums on BestEverAlbums.com. This album has a Bayesian average rating of 75.5/100, a mean average of 74.9/100, and a trimmed mean (excluding outliers) of 75.5/100. The standard deviation for this album is 14.3.

Riding the post-punk wave, The Police made their music stand out by leaning more heavily towards reggae than many of their contemporaries. The result was a fairly uncompromising career, even if some of their better known hits have been overplayed somewhat. This is a very good album, full of exciting sounds and virtuoso playing, and whilst it added little new to the Police's palette, it stands as a triumph in their catalogue.
High Points: When The World Is Running Down, You Make The Best Of What's Still Around; Don't Stand So Close To Me; Canary In A Coalmine

Enjoyable. Not as good as their previous efforts, but nice new wave/reggae-rock

It is all about the music. In this case there are no clever lyrics to distract. For me it works grand, just to sing along and feel good. The Police were a really good band. This is actually my favourite.

As I recall, this was one of those albums that ushered in the sound we later called, "new wave". It seemed as though the formatted radio stations didn't know quite what to do with it. But "Don't Stand" was too good to ignore. Not sure if the Police made it to the hall of fame. If they have, this record is one of the reasons why.

Ends up being just average.

This album is my favorite Police album. It is also number #14 on my greatest album chart. The only problem with this album is that 1/3 of the album is filler tracks that are normally instrumentals

This album is slightly underrated in my opinion. Ok, it's probably not their best, but some fine songs here; don't stand so close to me, driven to tears, and, canary in a coalmine. Enjoyable record.

Good album by The Police, the band said they rushed this album's recording and regret doing that. I wonder how this different would this album be had they spent more time developing it. Aside from that, great tracks with a few forgettable ones here and there.

Some exploit like "Don't stand so close to me" and "Behind my camel" that is a fantastic instrumental piece, but the album doesn't give anything new, it seems they are tired, far below the first two

Your feedback for Zenyatta Mondatta