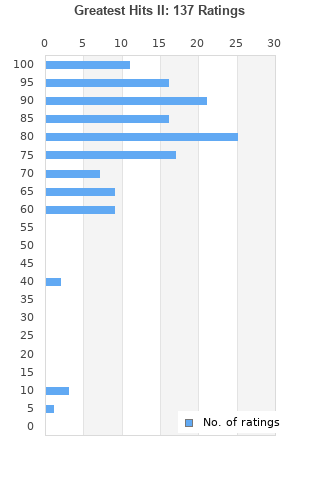 Greatest Hits II is ranked 17th best out of 51 albums by Queen on BestEverAlbums.com.

The best album by Queen is A Night At The Opera which is ranked number 97 in the list of all-time albums with a total rank score of 14,695. 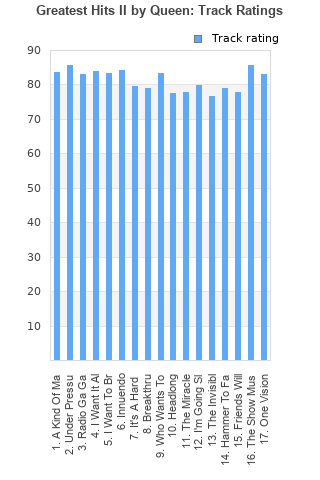 Rating metrics: Outliers can be removed when calculating a mean average to dampen the effects of ratings outside the normal distribution. This figure is provided as the trimmed mean. A high standard deviation can be legitimate, but can sometimes indicate 'gaming' is occurring. Consider a simplified example* of an item receiving ratings of 100, 50, & 0. The mean average rating would be 50. However, ratings of 55, 50 & 45 could also result in the same average. The second average might be more trusted because there is more consensus around a particular rating (a lower deviation).
(*In practice, some albums can have several thousand ratings)
This album is rated in the top 1% of all albums on BestEverAlbums.com. This album has a Bayesian average rating of 80.7/100, a mean average of 79.7/100, and a trimmed mean (excluding outliers) of 81.3/100. The standard deviation for this album is 16.2.

Better than I remember. Starts off really strong. Does kind of tail off and doesn't really compare with Volume One.

Not many bands could release another compilation and still fill it up with fantastic songs. Still, queen's second greatest hits album is not quite up there in quality as the first one, but it's still an extremely enjoyable album. Any record that features songs such as, under pressure, radio ga ga, and, I'm going slightly mad, is going to be fun. One niggle though is both, I want it all, and, hammer to fall, are in their inferior singles versions. Fair enough, it's a singles collection. At least, I want to break free, is far superior in it's single guise than it was on, the works, album. Another query, is why, las pelabras de amour, isn't included as it was a bigger hit than say, the miracle, or slightly mad. Probably they were included because of their videos, as greatest flix 2 was released simultaneously. Anyway, great album, just shows what a great singles band queen were.

This second greatest hits album is good, but not great, as there are some weaker tracks

Your feedback for Greatest Hits II