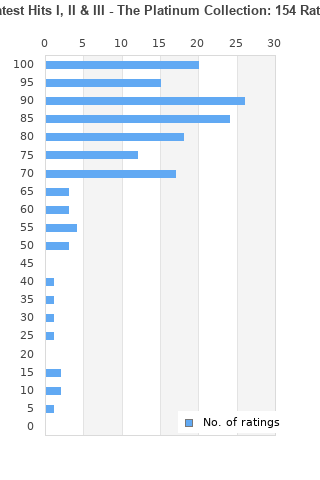 Greatest Hits I, II & III - The Platinum Collection is ranked 16th best out of 50 albums by Queen on BestEverAlbums.com.

The best album by Queen is A Night At The Opera which is ranked number 99 in the list of all-time albums with a total rank score of 14,950.

Listen to Greatest Hits I, II & III - The Platinum Collection on YouTube 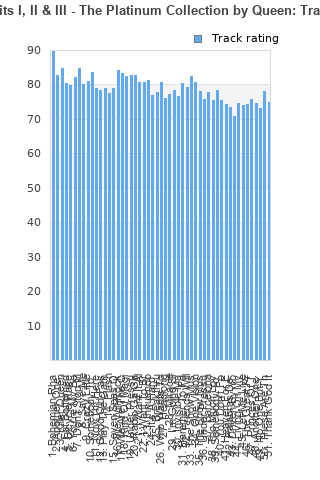 Rating metrics: Outliers can be removed when calculating a mean average to dampen the effects of ratings outside the normal distribution. This figure is provided as the trimmed mean. A high standard deviation can be legitimate, but can sometimes indicate 'gaming' is occurring. Consider a simplified example* of an item receiving ratings of 100, 50, & 0. The mean average rating would be 50. However, ratings of 55, 50 & 45 could also result in the same average. The second average might be more trusted because there is more consensus around a particular rating (a lower deviation).
(*In practice, some albums can have several thousand ratings)
This album is rated in the top 1% of all albums on BestEverAlbums.com. This album has a Bayesian average rating of 81.3/100, a mean average of 80.0/100, and a trimmed mean (excluding outliers) of 81.9/100. The standard deviation for this album is 18.6.

best best of ever :D

"Less is more" comes to mind too much dross here

I often laugh out loud that "Greatest Hits III" is an actual thing. Think what you may about Queen, they wrote enough well crafted singles to jam-pack a CDs worth for Greatest Hits I with enough stellar songs plucked from disastrous albums to fill out a Volume 2.

But Greatest Hits III is woeful in its existence. Bloated with redundant remixes and some repeated songs combined with naff album tracks and "was that a single?"s. Mind you, the stuff from Innuendo is terrific - just buy that LP instead.

51 Tracks of Queen goodness! They Will They Will Rock You!

This is essential music, plenty of love-able songs! Listened to it as a kid and still great.

Yes, it's a compilation. In fact it's 3 compilation albums grouped together. But jeezes, I wasn't bored for a second - more than tree hours Queen: no problem.

Your feedback for Greatest Hits I, II & III - The Platinum Collection