Live From The Fallout Shelter (live album) by Pixies 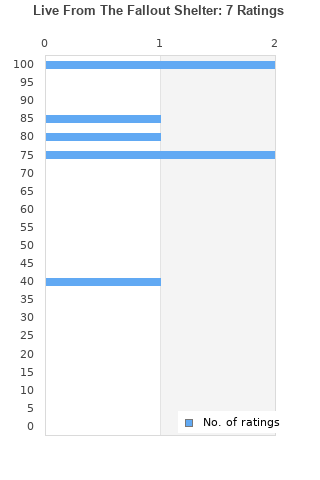 Live From The Fallout Shelter is ranked 16th best out of 23 albums by Pixies on BestEverAlbums.com.

The best album by Pixies is Doolittle which is ranked number 17 in the list of all-time albums with a total rank score of 44,648.

Listen to Live From The Fallout Shelter on YouTube 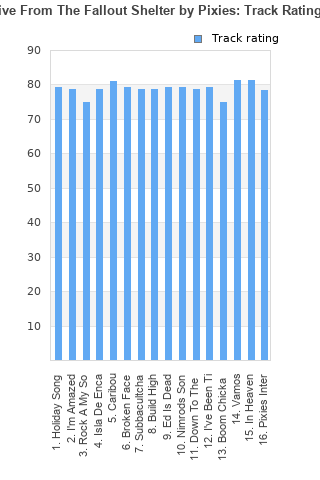 Live From The Fallout Shelter rankings

Live From The Fallout Shelter collection

Live From The Fallout Shelter ratings

Live From The Fallout Shelter favourites

Live From The Fallout Shelter comments

The 3 year spread of releases by The Pixies between 1987 and 1990 is simply jaw dropping , but unfortunately album quality begins to wain from this point and by 2014's 'Indie Cindy' and 2016's 'Head Carrier' their albums were (lets be honest) pretty awful. So it is for this reason I have viewed any new release with a large degree of scepticism . I'm a massive Pixies fan but oh how the mighty have fallen.

However 'Pixies Live from The Fallout Shelter' is an absolute treasure , a gem that is the most historically significant recording I've heard since the Beatles Anthology Series

What makes it so special ? For starters this recording goes way way back to almost the origin of the band . It's the equivalent of Pixies stepping out of the primordial soup . Think about this for a minute , this recording was made December 15 1986 ! . Lets put that into perspective:

Secondly , despite their tender years the songs that would form the basis for much of their career were already there in this 1986 performance

Thirdly the performance rocks , the Pixes slash and burn through the set list with an energy and clarity that is quite simply breath taking

Fourthly the band interview at the end of the album is awesome , Kim introduces herself as Mrs John Murphy , Frank introduces himself as Francis Black , whilst the bumbling host completely fluffs his lines . Pure gold

Completely perfect from top to bottom

Your feedback for Live From The Fallout Shelter