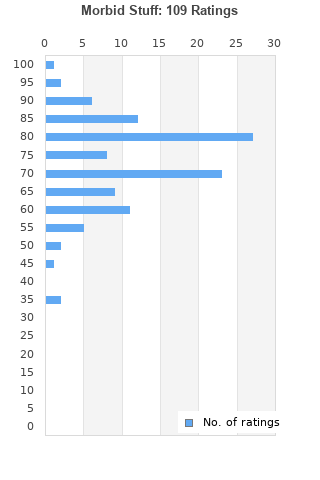 PUP Morbid Stuff POSTER Europe BMG 2019 Promo Poster For Album Approx 84cm X
Condition: Like New
Time left: 1d 18h 53s
Ships to: Worldwide
£8.39
Go to store
Product prices and availability are accurate as of the date indicated and are subject to change. Any price and availability information displayed on the linked website at the time of purchase will apply to the purchase of this product.  See full search results on eBay

Morbid Stuff is ranked as the best album by Pup. 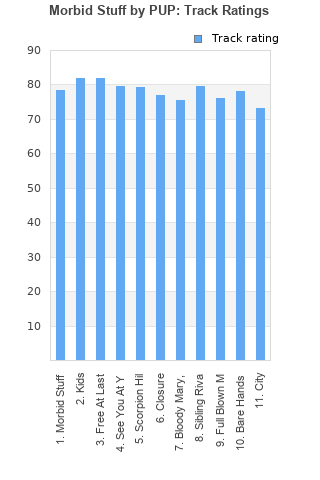 Rating metrics: Outliers can be removed when calculating a mean average to dampen the effects of ratings outside the normal distribution. This figure is provided as the trimmed mean. A high standard deviation can be legitimate, but can sometimes indicate 'gaming' is occurring. Consider a simplified example* of an item receiving ratings of 100, 50, & 0. The mean average rating would be 50. However, ratings of 55, 50 & 45 could also result in the same average. The second average might be more trusted because there is more consensus around a particular rating (a lower deviation).
(*In practice, some albums can have several thousand ratings)
This album has a Bayesian average rating of 73.0/100, a mean average of 72.3/100, and a trimmed mean (excluding outliers) of 72.9/100. The standard deviation for this album is 13.7.

Not my kind on music, but I found some interesting tracks. Best Free at last.

Pup constantly seems to consider writing interesting music, but backs off any interesting ideas into a generic mush of mediocrity. If they ever decided to release a Home, Like Noplace Is There, an Albatross, a TDAG, one of those really great genre defining and defying emo or emo pop albums, I wouldn't be surprised, but up until this point, they seem totally content settling for forgettable, lowest common denominator sadboi tunes.

Really wanted to like it but couldn't. Sounded overly generic and no other songs but Free at Last intrigued me.

One of the best pop punk albums I've heard in a long time! Ever since they came out with The Dream Is Over, I felt that PUP had the potential to put out something really great. On Morbid Stuff, they definitely live up to that potential. From the energetic riff on "Kids" to the catchy chorus on "Sibling Rivalry," this album is full of polished, well written songs. PUP has definitely grown as a band, as can be noted by the song structure of "Scorpion Hill," which I thoroughly enjoy. In addition, Stefan Babcock's vocals are really on point and add that extra bit of authenticity to each track.

I was surprised when I saw the current rating on this site - it seems way too low to me. I see this as PUP's best album as of yet, and with each listen I find more and more to like about it. Definitely will end up being one of my favorite albums of the year. If you are a fan of the genre, Morbid Stuff is an essential listen. Looking forward to what they put out next!

I really just don't like pop punk, no matter how hard I try to. I'll admit, tho, this is some of the better pop punk I've heard in a minute

In 2016, PUP had the consecration with their second album "The Dream Is Over". The Toronto quartet has established itself on the pop-punk scene with their formidable compositions. Three years have passed and here they are back with their long-awaited successor named "Morbid Stuff". Of course, the general atmosphere is far from being bad, on the contrary. "Morbid Stuff" will want to pogote for a long time especially listening to "See You At The Funeral", "Closure" or "Sibling Rivalry". PUP was expected after three years of radio silence and he meets expectations with "Morbid Stuff". Darker and more mature than its predecessors, the Toronto band never loses inspiration and promises memorable live performance. This is one of the best pop punk album of the decade.

Your feedback for Morbid Stuff