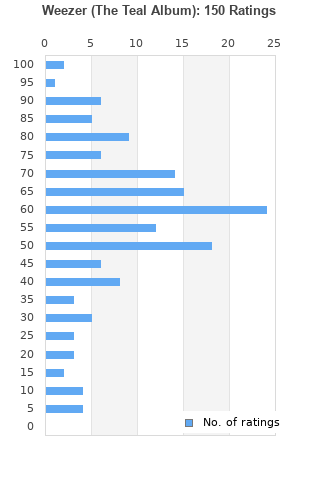 WEEZER - WEEZER [THE TEAL ALBUM] (CD)
Condition: Brand New
Time left: 13d 7h 6m 2s
Ships to: Worldwide
$12.90
Go to store
Product prices and availability are accurate as of the date indicated and are subject to change. Any price and availability information displayed on the linked website at the time of purchase will apply to the purchase of this product.  See full search results on eBay

Weezer (The Teal Album) is ranked 12th best out of 21 albums by Weezer on BestEverAlbums.com.

The best album by Weezer is Weezer (The Blue Album) which is ranked number 68 in the list of all-time albums with a total rank score of 22,105. 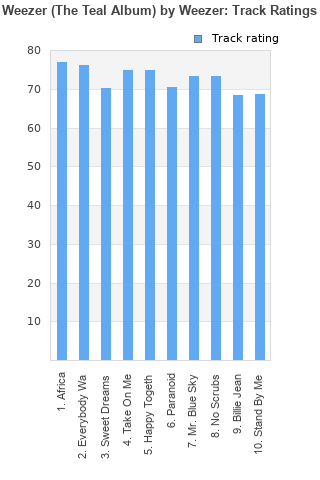 Rating metrics: Outliers can be removed when calculating a mean average to dampen the effects of ratings outside the normal distribution. This figure is provided as the trimmed mean. A high standard deviation can be legitimate, but can sometimes indicate 'gaming' is occurring. Consider a simplified example* of an item receiving ratings of 100, 50, & 0. The mean average rating would be 50. However, ratings of 55, 50 & 45 could also result in the same average. The second average might be more trusted because there is more consensus around a particular rating (a lower deviation).
(*In practice, some albums can have several thousand ratings)
This album has a mean average rating of 56.0/100. The trimmed mean (excluding outliers) is 56.0/100. The standard deviation for this album is 21.9.

Not a bad idea to bring into attention some hits from the past.

The ultimate documentation of the American wedding band experience

Weezer has been active since the 90s. They have been able to continually renew their sound. But the best of Weezer is still "The Blue Album" and "Pinkerton". Today, Weezer takes old commercial songs (like "Africa" from Toto) with their sauce. I find this album rather bad because I'm not necessarily a fan of their choice of song and Weezer covers does not bring anything original to the chosen songs.

Man, people really want to downvote each other on this one. Is this seriously going to be a divisive album? Guys. It's just a Weezer cover album. Why is this the thing people have opinions on?

It's clearly not a serious release, so don't judge it as one. A whole lot of people seem to miss that point, and I'm not sure how since the cover is hilarious. Other than that, it's a fun album to spin once in a while, maybe play some of those meme covers at a party while you're drunk.

Your feedback for Weezer (The Teal Album)