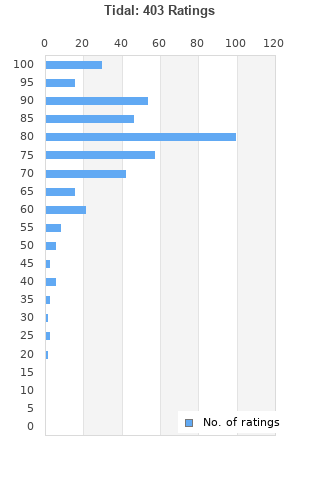 Tidal is ranked 4th best out of 5 albums by Fiona Apple on BestEverAlbums.com.

The best album by Fiona Apple is The Idler Wheel Is Wiser Than The Driver Of The Screw And Whipping Cords Will Serve You More Than Ropes Will Ever Do which is ranked number 314 in the list of all-time albums with a total rank score of 6,032. 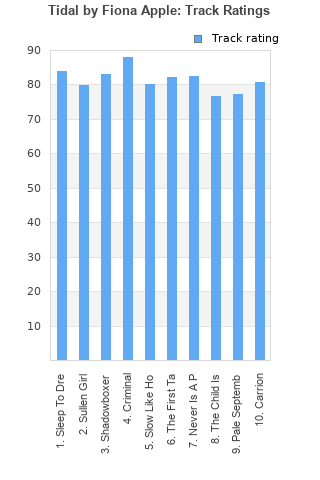 Rating metrics: Outliers can be removed when calculating a mean average to dampen the effects of ratings outside the normal distribution. This figure is provided as the trimmed mean. A high standard deviation can be legitimate, but can sometimes indicate 'gaming' is occurring. Consider a simplified example* of an item receiving ratings of 100, 50, & 0. The mean average rating would be 50. However, ratings of 55, 50 & 45 could also result in the same average. The second average might be more trusted because there is more consensus around a particular rating (a lower deviation).
(*In practice, some albums can have several thousand ratings)
This album is rated in the top 2% of all albums on BestEverAlbums.com. This album has a Bayesian average rating of 78.9/100, a mean average of 78.3/100, and a trimmed mean (excluding outliers) of 79.1/100. The standard deviation for this album is 13.5.

A strong start that dwindles out as the record goes on but you can see the potential in the music and there is a lot of stuff to love on here. This is a much more accessible record than her later releases and you can see the vast difference in experimentation in the fact that this record is lacking in quite a bit of it. This doesn't mean it isn't effective as we are treated to some simplistic but beautiful tracks that follow a formula and easily get into our heads. The best examples of this are Criminal, Shadowboxer and Sleep To Dream which are all some of her greatest ever hits. Her song writing is fantastic and it is so much fun to explore her lyrics as you go through the music. Instrumentally, it is fantastic with there being some incredible performances being put down. One highlight for me is the piano which leads us through every track and backs her vocal perfectly. This delicate style of playing suits the style she is going for and helps to make the whole record feel very cohesive. One issue I find with the record is that the structure of song and repetition of style does get boring by the end and that leads to it feeling quite drawn out and the final songs do take quite a dip in quality due to this. Overall, this is a great gateway album to Fiona Apple but it certainly isn't her greatest even though it has some brilliant highlights on it.

This album is so catchy. The First Taste is the best song. Such a catchy memorable melody. The whole album is great and I love all of it. Might not be as complex as When the Pawn... But its still a great piano rock album. Can't deny how great this album is!

This type of pop (Sophie B. Hawkins-esque, singer/songwriter) doesn't exactly appeal to me, but this is done so well, it does warrant praise in my opinion. It pulls from different genres, such as jazz (Pale September), alternative rock (Criminal), etc. Really good album, surprised it's not in the top 20 of 1996.

Starts strong, but runs out of steam before a strong final song. Still a great album.

Great debut from Fionna!! Still prefer her new album which is AOTY for me.

I haven't listened to this since high school--and somehow forgot to include log it. But yeah. Until The Idler Wheel, I would've said this was her best work. It definitely feels like the product of a 19-year-old, but one who's. really wise beyond their years. Seriously. The songwriting is undeniable--albeit buoyed by very '90s production. And Apple's lyricism, save for some cutesy turns of phrase, is truly breathtaking at times. An absolute classic, no question.

Fiona Apple had such a toned-down, quiet debut that it's often met with mixed reaction because people thought it lacked in emotion. The album is actually quite different. It's lyrics go deep into the mind of a troubled young girl, and the music itself, let alone the vocals, showcase her talented way of showing her emotions. The highlights of the album include the high notes in "Criminal", "Slow Like Honey", and "Never Is a Promise", and, of course, the deep sadness of "Sullen Girl".

Sleep To Dream and Criminal are fantastic. I love this dark/fierce world she discovered/created.

Your feedback for Tidal