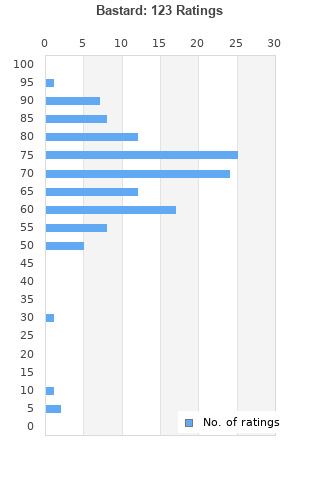 Tyler the creator Bastard Vinyl LP 12" record black Flower Boy Wolf Goblin
Condition: New
Time left: 23d 11h 37m 39s
Ships to: Worldwide
$140.00
Go to store
Product prices and availability are accurate as of the date indicated and are subject to change. Any price and availability information displayed on the linked website at the time of purchase will apply to the purchase of this product.  See full search results on eBay

Bastard is ranked 7th best out of 8 albums by Tyler, The Creator on BestEverAlbums.com.

The best album by Tyler, The Creator is Igor which is ranked number 332 in the list of all-time albums with a total rank score of 5,955. 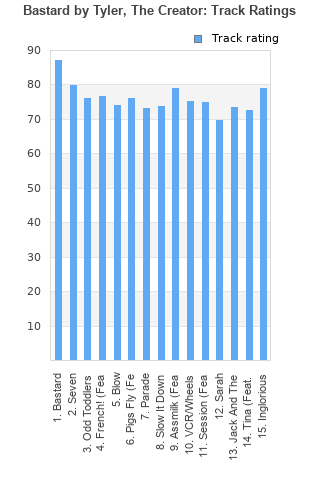 Rating metrics: Outliers can be removed when calculating a mean average to dampen the effects of ratings outside the normal distribution. This figure is provided as the trimmed mean. A high standard deviation can be legitimate, but can sometimes indicate 'gaming' is occurring. Consider a simplified example* of an item receiving ratings of 100, 50, & 0. The mean average rating would be 50. However, ratings of 55, 50 & 45 could also result in the same average. The second average might be more trusted because there is more consensus around a particular rating (a lower deviation).
(*In practice, some albums can have several thousand ratings)
This album has a Bayesian average rating of 71.5/100, a mean average of 69.6/100, and a trimmed mean (excluding outliers) of 71.4/100. The standard deviation for this album is 14.9.

This is definitely an overlooked and underrated project. It's stripped down production is what it gives it its aesthetic.

The most consistent and the jazziest of Tyler's works.
To ShaneSpear: You were right about Earl, man!

Bastard is one of my favourite songs ever, cept for all the feeling sorry for himself bullshit

Say what you will about the hipster culture surrounding OFWGKTA in general, there are some genuine winners on this album. The opening title track is dark, sad, and evil enough to reasonably compare to a 1999-2001 Eminem. Blow is the most funky song about killing hookers I can think of at the moment. The production is above average as well. Check the song French where mid song the entire beat changes while he's crusing down Walmart selling cupcakes. Earl (who may end up being the most talented of the collective one day) also makes a cameo in Ass Milk. Is this album perfect? No. Do I buy 100% into the whole "We're black, we're young, fucking watch out for us" deal? No. I've lived through NWA, Wu-Tang, and Eminem. And I've seen Tyler hanging out with Justin Bieber. But just because a rapper knows how to market doesn't mean he doesn't know how to flow. Bastard is a great first offical effort and I am pumped for the next release this year.

Your feedback for Bastard