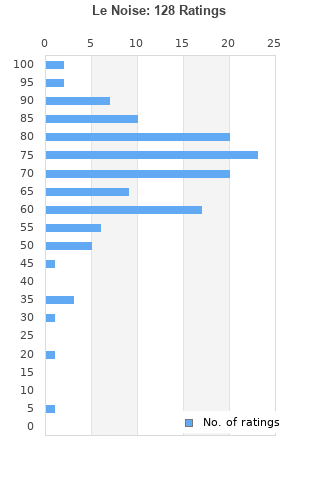 Neil Young – Le Noise CD Reprise 2010 NEW
Condition: Brand New
Time left: 1d 4h 54m
Ships to: Worldwide
$15.00
Go to store
Product prices and availability are accurate as of the date indicated and are subject to change. Any price and availability information displayed on the linked website at the time of purchase will apply to the purchase of this product.  See full search results on eBay

Le Noise is ranked 16th best out of 76 albums by Neil Young on BestEverAlbums.com.

The best album by Neil Young is After The Gold Rush which is ranked number 76 in the list of all-time albums with a total rank score of 19,852. 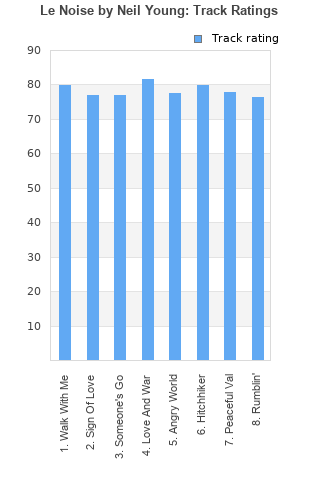 Rating metrics: Outliers can be removed when calculating a mean average to dampen the effects of ratings outside the normal distribution. This figure is provided as the trimmed mean. A high standard deviation can be legitimate, but can sometimes indicate 'gaming' is occurring. Consider a simplified example* of an item receiving ratings of 100, 50, & 0. The mean average rating would be 50. However, ratings of 55, 50 & 45 could also result in the same average. The second average might be more trusted because there is more consensus around a particular rating (a lower deviation).
(*In practice, some albums can have several thousand ratings)
This album has a Bayesian average rating of 71.2/100, a mean average of 70.0/100, and a trimmed mean (excluding outliers) of 71.0/100. The standard deviation for this album is 14.8.

An interesting albeit not entirely successful collaboration from Young and Lanois. It's okay, but it's all a bit samey, and sometimes you just cry out for some drums and bass to kick in and to just get rocking. Hitchhiker, is a highlight though.

Not my favourite Neil Young album an acquired taste needed here, maybe it will grow on me but I doubt it.

Another Neil Young experiment record. Not to everyone's taste but the man has no fear when it comes to music. You have to at least admire that.

Can't get into it. Not many do albums with just heavy distortrd electric guitar as backing. There is a reason why.

Doesn't contain any instant classics, but what I like about it is how it sounds. It's sparse--just Neil and his electric guitar--but it's so heavy. It's the nastiest guitar sound I've heard on a record in a long time.

Your feedback for Le Noise