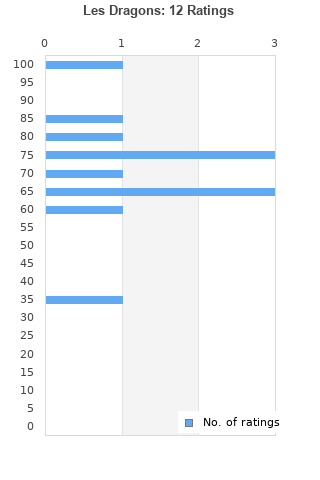 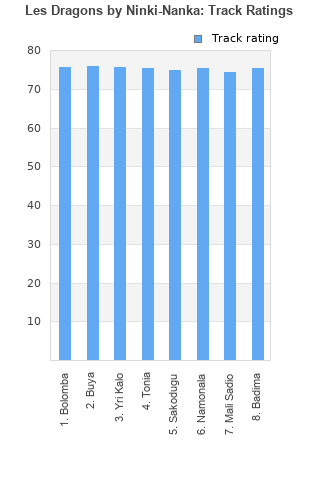 Rating metrics: Outliers can be removed when calculating a mean average to dampen the effects of ratings outside the normal distribution. This figure is provided as the trimmed mean. A high standard deviation can be legitimate, but can sometimes indicate 'gaming' is occurring. Consider a simplified example* of an item receiving ratings of 100, 50, & 0. The mean average rating would be 50. However, ratings of 55, 50 & 45 could also result in the same average. The second average might be more trusted because there is more consensus around a particular rating (a lower deviation).
(*In practice, some albums can have several thousand ratings)
This album has a Bayesian average rating of 72.2/100, a mean average of 71.7/100, and a trimmed mean (excluding outliers) of 71.7/100. The standard deviation for this album is 13.1.

This is as obscure an album as you could hope to find. It's available on the major streaming services, the tracks have been uploaded to YouTube, and it's even available as a digital purchase from Amazon. Yet, there are no listings for it on even the more inclusive music sites like Discogs and AllMusic. Outside of a pitiful number of YouTube views, I've found no evidence of anyone even acknowledging that this album or the artists exist.

The album is credited to "Bacary & Margit Smith". Aside from not making it easy to find additional information on the couple, the surname is a little puzzling for a couple that I'm assuming to be from Mali/Guinea/Senegal and France, respectively.

I did come across another album credited to Marrie Bremer & Margit Smith called Musica Mundi (which translates to "world music" from Spanish or Portuguese, interestingly), which was recorded in the U.S. and released in 1980. This would have been right around the very same time Les Dragons was recorded (probably in France) and released, so I find it doubtful it's the same Margit Smith.

An interesting note - Deezer credits the album to Bouba Cissoko and Margrit Smith. Bouba Cissoko makes a lot more sense for a Mandé kora player. And after another listen to the album, in the second track, "Buya", you can clearly hear him sing "Bouba Cissoko" a couple of times, as well as "Margit" (which he pronounces "mar-geet"). I don't know how Deezer figured it out, but they might be on to something.

The album was released by the label Balibana International Productions, or Éditions Balibana, or one of the numerous other aliases the label seems to have, which is based out of L'Haÿ-les-Roses, France and headed by M. Diapy Diawara. I did find some evidence of a possible 2011 CD reissue of the album on the label's Facebook page (under Edition Balibana) in the form of an alternate cover, but I still haven't found a copy of any kind for sale anywhere.

One of the jewels in this album's crown is the recording quality. The recording space sounds cavernous and lends the entire album a great deal of lofty, natural reverb. The vocals sound particularly astonishing. I can't rule out production effects, but the reverb sounds natural and I can only question the echoes heard when he projects loudly. The only complaint here is with the digital transfer. There's at least two tape errors on the album, the big one being on the final track which lasts a full five seconds.

Vocally, Bacary's tone, range, and delivery are all eerily reminiscent of one Ali Farka Touré...competent, yet dripping with passion. There are more capable kora players around, but I've heard a well known player in Toumani Diabate say that the melody should be allowed to breathe, and Bouba does that. His improvisational style is also striking and colorful, but subtle, and displays his mastery of allowing the music to pulse, but not lull.

I'm not sure what Margit's role is throughout the album. She's pictured with a kora herself, but it's honestly hard to tell what she's contributing given the nature of the instrument. A good solo player can easily play counterpoint in three, maybe more voices, so it's easy for two instruments to sound like one. Hopefully, I can distinguish her playing for Bouka's on future listens. There are some new age-y elements to the album (the gongs that kick off the album sound eastern) that I want to attribute to her. She looks every bit the part of a new age musician, if I'm being honest.

I don't give this a 100 lightly. I chanced upon it and listened on a whim, with no expectations that it would be anything other than fair, as far as Mandé music goes. But, this hits me right in my soul. Everything from Bouka's meditative, passionate vocals, to the soulful kora melodies, to the soft patter of drums, to the excellent recording...it all melds together into a profound and eloquent slow burn. I hope others hear what I hear.

Your feedback for Les Dragons