Freedom Of Choice (album) by Devo 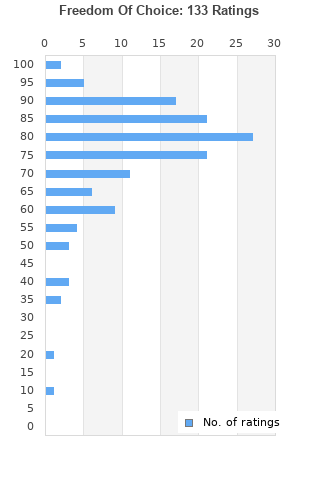 Freedom Of Choice is ranked 2nd best out of 35 albums by Devo on BestEverAlbums.com. 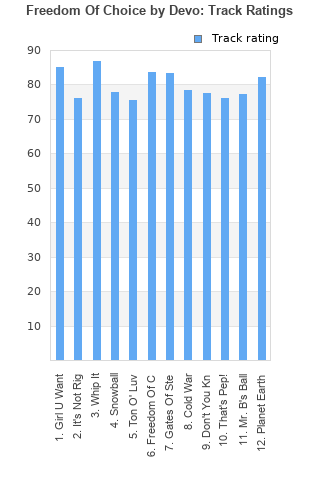 Rating metrics: Outliers can be removed when calculating a mean average to dampen the effects of ratings outside the normal distribution. This figure is provided as the trimmed mean. A high standard deviation can be legitimate, but can sometimes indicate 'gaming' is occurring. Consider a simplified example* of an item receiving ratings of 100, 50, & 0. The mean average rating would be 50. However, ratings of 55, 50 & 45 could also result in the same average. The second average might be more trusted because there is more consensus around a particular rating (a lower deviation).
(*In practice, some albums can have several thousand ratings)
This album is rated in the top 6% of all albums on BestEverAlbums.com. This album has a mean average rating of 76.0/100. The trimmed mean (excluding outliers) is 77.2/100. The standard deviation for this album is 14.9.

This is way too underrated. This is a really solid album, one of the best New Wave records for me. My only issue is that it is a bit too short, but still, this is a great album.

Overall it plays like a less polished, less revolutionary and less enjoyable Speaking in Tongues. It has its moments, but they can be fleeting.

More interesting than their debut, IMO. A lot of fun!

Girl U want, freedom of choice, gates of steel still sound fresh, and of
Course, whip it will always. Solid Lp.

I prefer to punk aspects of the previous LPs. Gone are the raunchy guitar licks and solos. Gone is the raw contempt.

Absolutely Love this album still today. Girl U Want, Snow Ball, Freedom of Choice, Whip It, etc... I can listen to this album start to finish without any skips. Some classic videos also made with this album

Devo produced some of the best pop of the 80's. The production and choice of material on this record is outstanding.

No comments? Seriously? Great songs, very well produced, and catchy as hell. Girl U Want, Whip It, Gates of Steel, Don't You Know, Snowball, the whole thing is excellent.

Your feedback for Freedom Of Choice