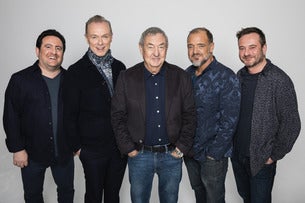 Live At The Roundhouse rankings

Live At The Roundhouse collection

Live At The Roundhouse ratings

Rating metrics: Outliers can be removed when calculating a mean average to dampen the effects of ratings outside the normal distribution. This figure is provided as the trimmed mean. A high standard deviation can be legitimate, but can sometimes indicate 'gaming' is occurring. Consider a simplified example* of an item receiving ratings of 100, 50, & 0. The mean average rating would be 50. However, ratings of 55, 50 & 45 could also result in the same average. The second average might be more trusted because there is more consensus around a particular rating (a lower deviation).
(*In practice, some albums can have several thousand ratings)
This album is rated in the top 1% of all albums on BestEverAlbums.com. This album has a Bayesian average rating of 80.7/100, a mean average of 87.1/100, and a trimmed mean (excluding outliers) of 87.1/100. The standard deviation for this album is 7.5.

Live At The Roundhouse favourites

Live At The Roundhouse comments

This album is really good! Despite enjoying to listening the band's records in the “Barrett era”, I always felt that these themes deserved an updated recording. Since Gilmour / Waters / Mason never played together again, this album is as close as we can get to it. In the band is the only element that participated in all Pink Floyd albums, so this album should not be seen as a mere tribute. Without a doubt, one of the best live album of 2020!

Hats off to Nick Mason for getting this band together and for getting all the psychedelic Floyd tracks together in fantastic vinyl package. Gary Kemp was an interesting choice of vocalist, nobody in this age has the whimsical vocal talent Barrett had in his short lived heyday so for that reason Gary Kemp is as good a choice as anyone. It works!

Your feedback for Live At The Roundhouse