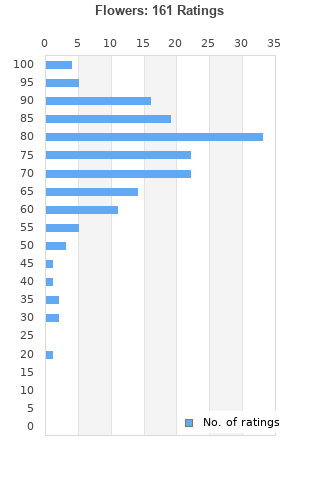 Flowers is ranked 23rd best out of 95 albums by The Rolling Stones on BestEverAlbums.com.

The best album by The Rolling Stones is Exile On Main St. which is ranked number 43 in the list of all-time albums with a total rank score of 27,078. 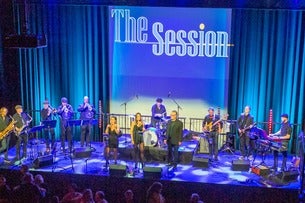 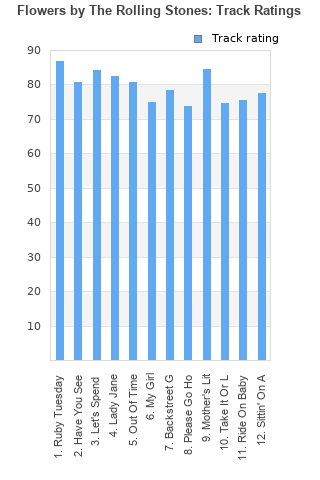 Rating metrics: Outliers can be removed when calculating a mean average to dampen the effects of ratings outside the normal distribution. This figure is provided as the trimmed mean. A high standard deviation can be legitimate, but can sometimes indicate 'gaming' is occurring. Consider a simplified example* of an item receiving ratings of 100, 50, & 0. The mean average rating would be 50. However, ratings of 55, 50 & 45 could also result in the same average. The second average might be more trusted because there is more consensus around a particular rating (a lower deviation).
(*In practice, some albums can have several thousand ratings)
This album is rated in the top 18% of all albums on BestEverAlbums.com. This album has a Bayesian average rating of 74.6/100, a mean average of 74.0/100, and a trimmed mean (excluding outliers) of 74.7/100. The standard deviation for this album is 15.0.

A rather messy compilation. There were better selections available at the time.

An American release with a title deceptively trying to make the Rolling Stones part of the summer of love while in reality they were in a fight for their liberty with the British establishment. The album itself, is all over the place. Some singles and their b-sides, a couple of outtakes from, aftermath, and an excellent version of, my girl, which wouldn't have been out of place on the stones own UK release of, out of our heads, which leaned heavily towards soul in it's direction. Yes, the album is extremely uneven, but you can't argue with the quality of the music on offer. If not anything else, it's an interesting example of how record companies released material by artists to coincide with the sign of the times.

A necessary compilation album for US fans at the time. I'm glad they finally stop the silliness of US vs. UK releases.

A nice little album to tidy up the differences between the US and UK albums before they finally stop the funny business of different releases for the different markets.

"Flowers" is a compilation album that was originally released in the U.S. in 1967. It could well be included among the Rolling Stones original albums as well since only two tracks were previously released on LP in the States - the singles "Ruby Tuesday" and "Let's Spend the Night Together", which were both on "Between the Buttons" . Conversely, these two tracks were not on any European album, and bearing in mind that three tracks were entirely new and that "Have You Seen Your Mother" was not found on any album either, "Flowers" was definitely also interesting for European fans .

The album might seem a bit messy - the song-order probably could have been better but it does contain a lot of pearls. "Ruby Tuesday" are supposedly one of the most beautiful the group has ever recorded, and both "Backstreet Girl" and "Lady Jane" are very delicate ballads.

"Out of Time" could have been a hit for the Rolling Stones, but it was instead for Chris Farlow. "Mother's Little Helper" has both the twinkle in his eye and a good dose of social realism - while it is also a nice melody.

As with the three "new" songs the group's version of "My Girl" is definitely my favorite version of this number. "Ride On Baby" has very fine melodic verses, the chorus, unfortunately does not quite live up to this, but after all, a good number.

"Sitting on a Fence" is both textually and melodically a very good number, which also has a very nice guitar melody-line - strange that the mistake towards the end ws not corrected. This song was in a much weaker version a minor hit for the duo "Twice as Much".

"Take it or Leave it" from "Aftermath was incidentally also a minor hit for The Searchers - so the strength of the song writing is obvious.

The Stones' own two hits "Let's Spend the Night Together" and "Have You Seen Your Mother" are not among the group's best, yet hits. The only slightly weak number is "Please Go Home"

This album was a great way to fill in the gaps. I know its a bit of a compilation, but there's plenty of new stuff not found on the other albums, and you can't argue with the content.

Your feedback for Flowers