Pressure Machine (studio album) by The Killers (US) 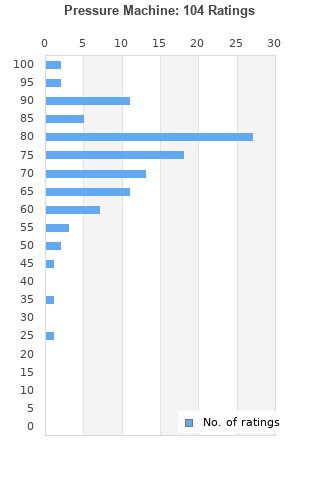 Sorry, no matches on eBay for "Pressure Machine The Killers US".
See full search results on eBay

Pressure Machine is ranked 8th best out of 11 albums by The Killers (US) on BestEverAlbums.com.

The best album by The Killers (US) is Hot Fuss which is ranked number 188 in the list of all-time albums with a total rank score of 9,729. 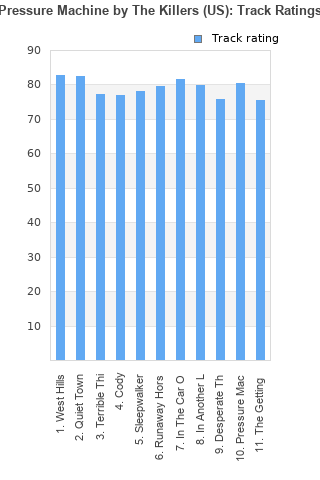 Rating metrics: Outliers can be removed when calculating a mean average to dampen the effects of ratings outside the normal distribution. This figure is provided as the trimmed mean. A high standard deviation can be legitimate, but can sometimes indicate 'gaming' is occurring. Consider a simplified example* of an item receiving ratings of 100, 50, & 0. The mean average rating would be 50. However, ratings of 55, 50 & 45 could also result in the same average. The second average might be more trusted because there is more consensus around a particular rating (a lower deviation).
(*In practice, some albums can have several thousand ratings)
This album is rated in the top 6% of all albums on BestEverAlbums.com. This album has a Bayesian average rating of 76.5/100, a mean average of 76.5/100, and a trimmed mean (excluding outliers) of 76.9/100. The standard deviation for this album is 10.5.

Killers career phase 1.0 saw them crash into our world and quickly become one of the biggest bands on the planet on the back of the ridiculously good ‘Hot Fuss’ and ‘Sam’s Town’. Phase 2.0 was the disappointing mid career slump with the disappointing ‘Day & Age’ and ‘Battle Born’ and this is where I kinda lost interest in The Killers convinced the best was behind them. That was until 2017’s wonderfully wonderful ‘Wonderful Wonderful’ which would kick off Killers 3.0 in fine style, then last years ‘Imploding the Mirage’ continued the excellence bringing us up to 2021 and ‘Pressure Machine’ and god damn it Brandon Flowers and co have done it again, and this one is probably the best of the lot which really is the highest compliment considering how high these guys have set the bar over the past 17 years

This isn’t your typical Killers album full of anthemic big sounds, rather a down to earth reflection of Flowers roots growing up in Nephi, Utah. But this is no heart felt love letter rather its an honest warts and all expose of the harsh realities of small town life full of economic hardships, domestic violence, substance abuse, suicides and hopeless desolation with no escape . Every song tells a story, every sound grab capture’s the mood and paints a mind picture of the sad character behind the voice

It’s one of those albums where there’s real beauty in the train wreck subject matter and put simply is the best album in 2021. Brandon Flowers and The Killers will never release a more poignant album for our troubled times

This album definitely took me by surprise, I didn’t expect to enjoy it nearly as much as I did. It perfectly encapsulates small town America. 8/10

I didn't expect to enjoy a Killers album from the year 2021... but look what happened. This is great.

Hands down their most brilliant and beautiful work they have put out since Sam's Town. Almost too good to be true with tracks like Quiet Town and In The Car Outside. Some of Flower's and band's most intimate and personal work yet.

The Killers Most Cohesive Album Yet


A lot of people’s biggest problem with the Killers is their lack of album flow and consistency. The biggest example of this is Hot Fuss. The first side of the album is LOADED with hit after hit and contains some of the best music of the early 2000s. Only to be followed by a second side that isn’t terrible by any means but compared to the first side it’s like comparing Nikes to Reeboks. With Pressure Machine the Killers have finally made an album that works together throughout the entire runtime.

Instead of the indie pop and pop rock that is typical of the band that has gotten a little bit old they lean more into a folkier Heartland Rock. In my opinion this change in sound suits them and is very refreshing coming from them. The opener West Hills has already became one of my favorites from them and showcases the sound in a great way. There are some moments on here that get a little dull and boring but there are some excellent tracks that pull it up.

This is also a concept album which is also new for the band. Brandon Flowers grew in a small town in Utah called Nephi. Throughout the album there are clippings and interviews from various people in the town. In Flowers lyrics he details different stories and perspectives of people in this said town. These all showcase not only what it’s like growing up in Nephi, Utah but also all small towns in general. Growing up in a small town in Idaho I relate a lot to this.

With a cohesive concept album The Killers have released a great modern album that I will definitely return to often. And also they didn’t mess up the Phoebe Bridgers feature.

Your feedback for Pressure Machine