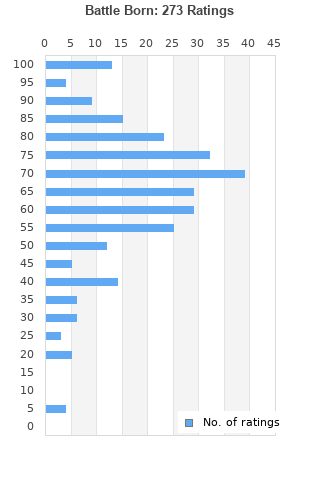 KILLERS - Battle Born - CD - **Excellent Condition**
Condition: Very Good
Time left: 21h 51m 36s
Ships to: Worldwide
$18.75
Go to store
Product prices and availability are accurate as of the date indicated and are subject to change. Any price and availability information displayed on the linked website at the time of purchase will apply to the purchase of this product.  See full search results on eBay

Battle Born is ranked 4th best out of 10 albums by The Killers on BestEverAlbums.com.

The best album by The Killers is Hot Fuss which is ranked number 175 in the list of all-time albums with a total rank score of 10,858. 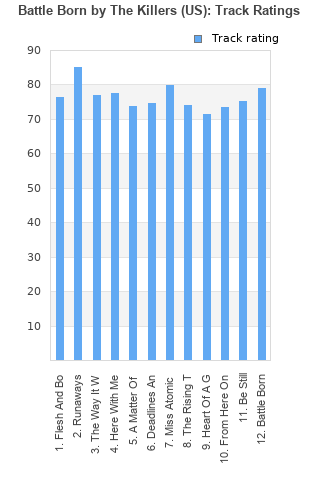 Rating metrics: Outliers can be removed when calculating a mean average to dampen the effects of ratings outside the normal distribution. This figure is provided as the trimmed mean. A high standard deviation can be legitimate, but can sometimes indicate 'gaming' is occurring. Consider a simplified example* of an item receiving ratings of 100, 50, & 0. The mean average rating would be 50. However, ratings of 55, 50 & 45 could also result in the same average. The second average might be more trusted because there is more consensus around a particular rating (a lower deviation).
(*In practice, some albums can have several thousand ratings)
This album has a Bayesian average rating of 65.6/100, a mean average of 64.3/100, and a trimmed mean (excluding outliers) of 65.3/100. The standard deviation for this album is 19.3.

Fully embracing their newfound synthpop sound, Battle Born is The Killers' slickest and most overproduced album so far. While it continues to combine the post-punk sounds from the band's early albums, it delves deeper into the synthpop sound explored in Day & Age. This time, however, the energetic rhythm is toned down in favor of a bigger depth and subtler emotions. It's like the band suddenly found their vulnerable side and decided to make an album revolving around that.

The first few songs form a great string of starting tracks, and the rest of the album continues the largely even flow of melodic rock tracks. It's a very approachable album to listen to, thanks to the synth-heavy sound and the memorable hooks, particularly in the amazing singles. Battle Born is and will remain, The Killers' most radio-friendly and mainstream LP. It's difficult not to love the sound of the album, even if it's a far cry from the edgier sound they are usually remembered for.

I know I'm gonna get some hate for this but this is my favorite Killers album. I love the emotion in Flowers' voice. The lyrics are perfect. Its got and overall teenage love feel to it and it is a huge step up from Day & Age.

There's a good sense of place, but I didn't find myself enjoying much. I liked Here With Me, Battle Born and the bonus track Pizefighter but honestly, none of those are mindblowing.

Desperately poor. So dull. They have just stopped trying.

Battle Born is one of my favourite songs of all time, however the rest of this album is really poor to be honest.

1) Uninspired and slow, it's as if they just didn't want to make this album but felt they had to instead.

2) Overrrrrproduced and formulaic, so many of the songs sound so similar and just boring, but also the songs have no character like they did in hot fuss.

3) Poor choice of instruments, over use of synthesisers and not enough of a rough sound from guitars or drums.

Your feedback for Battle Born