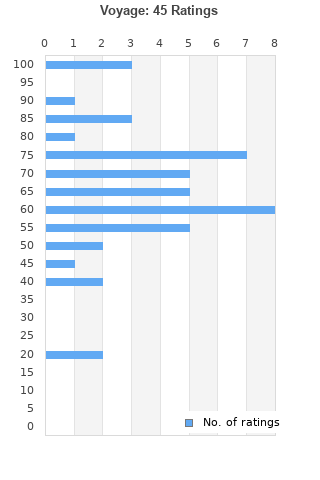 ABBA - Voyage Exclusive Limited Edition Orange Colored Vinyl LP INHAND FREE SHIP
Condition: New
Time left: 6h 41m 26s
Ships to: Worldwide
$59.99
Go to store
Product prices and availability are accurate as of the date indicated and are subject to change. Any price and availability information displayed on the linked website at the time of purchase will apply to the purchase of this product.  See full search results on eBay

Voyage is ranked 14th best out of 23 albums by ABBA on BestEverAlbums.com.

The best album by ABBA is Arrival which is ranked number 1163 in the list of all-time albums with a total rank score of 1,570. 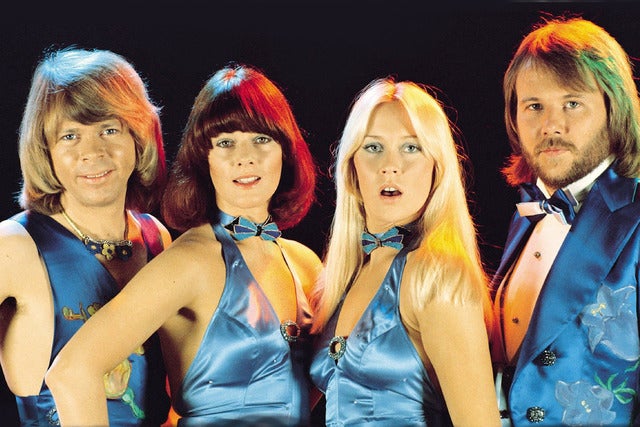 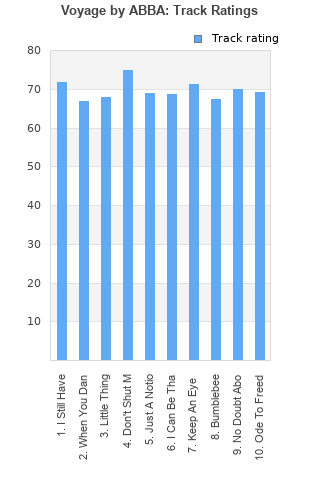 Rating metrics: Outliers can be removed when calculating a mean average to dampen the effects of ratings outside the normal distribution. This figure is provided as the trimmed mean. A high standard deviation can be legitimate, but can sometimes indicate 'gaming' is occurring. Consider a simplified example* of an item receiving ratings of 100, 50, & 0. The mean average rating would be 50. However, ratings of 55, 50 & 45 could also result in the same average. The second average might be more trusted because there is more consensus around a particular rating (a lower deviation).
(*In practice, some albums can have several thousand ratings)
This album has a Bayesian average rating of 67.9/100, a mean average of 66.4/100, and a trimmed mean (excluding outliers) of 66.4/100. The standard deviation for this album is 15.8.

I have always loved ABBA. Those two girls can sing like no others. I can honestly say that I HAVE waited 40 years for this newest album to be released. I never thought that I'd actually be listening to NEW ABBA in 2021. Personally, I thought that ABBA ended on a very high note with THE VISITORS. They had matured and they had evolved. I had hoped that this album would have picked up right where they left off. Unfortunately, I am rather disappointed with this offering. It is a good album...but it is NOT a worth-the-40-year-wait album. Most of the songs sound like they are tracks from some musical and not from the powerhouse hit-making machine. This is not the ABBA I had hoped to hear.

It is not a fantastic album, but after 40 years still sound totally Abba. Benny Andersson writes music like no other. Slightly better than what I was hoping for. The ladies can still sing great together! "Little Things for Xmas"!

If you’re expecting an album of ABBA similar to their mid 70s imperial phase you will be disappointed. However if you are familiar with their later albums, particularly The Visitors there is plenty to love here. This is not just the return of ABBA, it’s the return of mature ABBA.
That’s not to say there are no upbeat tunes here, there are, Don’t Shut Me Down, Just a Notion, Keep an Eye on Dan and No Doubt About It are waiting to be blasted out of radio’s worldwide.
But there’s more, there classical touches (Ode To Freedom), Irish jigs (When You Danced With Me), Christmas (Little Things), marital strife and custody problems (I Can Be That Woman and Keep an Eye on Dan).
Bizarrely, most of the songs lack choruses, preferring to climax on the last line of the verse and left turns aplenty are taken within ABBA’s pop universe. For instance I Sill Have Faith In You’s delivery is as wordy and literal as the Manic Street Preachers at their best. There are hooks aplenty for sure but when a chorus does crop up, often than not, they’re understated giving the songs an elusive, hard to pin down nature. For a pop album it’s certainly the most awkward and uncompromising I’ve yet to hear- make of that what you will. So it’s not Little Mix.
On a final note, this album has taken 40 years to arrive, it’d be more than a little over-hasty to dismiss it after a cursory listen as I suspect much of its charms will reveal itself over time particularly as it is designed for repeat listening. Disposable pop it is not. 9/10

One or two good tracks around the middle of the album but ABBA mostly fail to recapture their past glories here and some of the songs are too cheesy for my liking. Also never thought Christmas songs belong on anything other than Christmas albums too and having it as the third track is just strange

A very dissapointing album. The "Mamma Mia" fans will probably like it but there's not even a glimpse of the old ABBA magic that interweaved energetic pop with a layer of swedish melancholy on these 10 tracks. ABBA were pioneers of the wave era and created timeless classics. Most songs on "Voyage" are either boring sing-alongs or uninspired sadness.

But I will always love ABBA for the inspiration that "The Album", "Arrival" and "Super Trouper" gave me for more than 40 years and at least ABBA tried to make a new album of their own without cheasy hip hop & r&B tunes.

"Thank you for the Music" Agnetha, Frida, Benny & Bjorn. I will not joyn you on the "Voyage" but "Move On"

Your feedback for Voyage