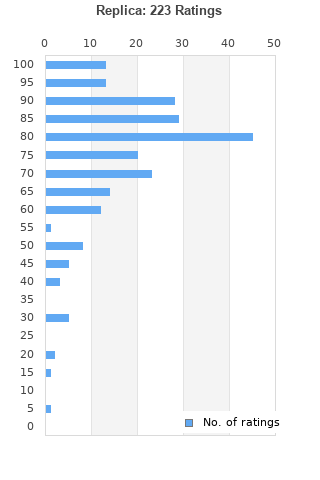 ONEOHTRIX POINT NEVER - REPLICA NEW CD
Condition: Brand New
Time left: 17d 14h 28m 28s
Ships to: Worldwide
$23.99
Go to store
Product prices and availability are accurate as of the date indicated and are subject to change. Any price and availability information displayed on the linked website at the time of purchase will apply to the purchase of this product.  See full search results on eBay

Replica is ranked as the best album by Oneohtrix Point Never. 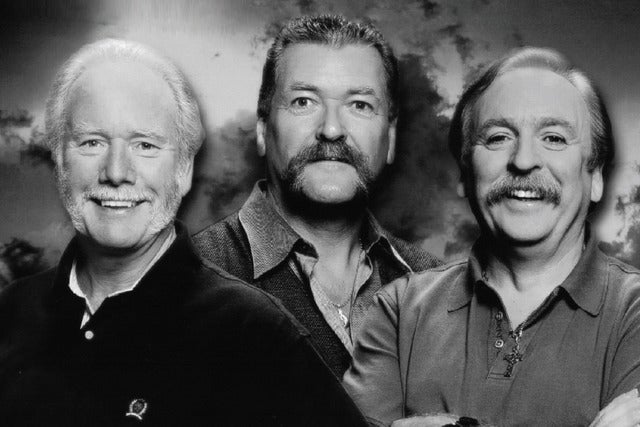 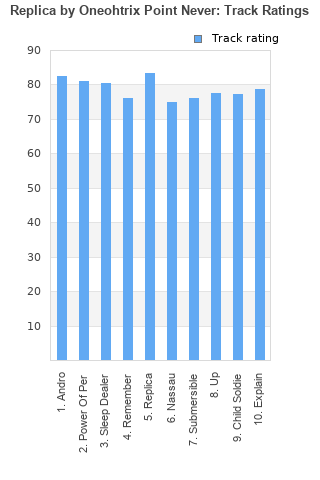 Rating metrics: Outliers can be removed when calculating a mean average to dampen the effects of ratings outside the normal distribution. This figure is provided as the trimmed mean. A high standard deviation can be legitimate, but can sometimes indicate 'gaming' is occurring. Consider a simplified example* of an item receiving ratings of 100, 50, & 0. The mean average rating would be 50. However, ratings of 55, 50 & 45 could also result in the same average. The second average might be more trusted because there is more consensus around a particular rating (a lower deviation).
(*In practice, some albums can have several thousand ratings)
This album is rated in the top 5% of all albums on BestEverAlbums.com. This album has a Bayesian average rating of 77.1/100, a mean average of 76.1/100, and a trimmed mean (excluding outliers) of 77.3/100. The standard deviation for this album is 16.9.

I love just listening to this album and looking at the cover art; it fits the soundscapes contained within

Good album, though the middle can be a chore.

Man the soundscapes on this record are so potent. This gives me a Boards of Canada vibe. A melding of the sampling from Geogaddi with the dreamscapes of The Campfire Headphase. Just necessary to be listened.

Abstraction that breaks logic and recreates textures and universes in every song. Experimental ambient music as original as it gets.

Badass record. Too bad R Plus Seven didn't hold up to this.

The one comparison that comes to mind when listening to this is F♯ A♯ ∞, Godspeed's debut. That album was the soundtrack of the apocalypse and this is the soundtrack of the void, where everything goes to die. The fact this is made of samples from old tv commercials makes me feel even more certain of that, as if they've come back from the dead, to make this droning reminder of death. His previous records felt more like landscapes, expanding, seeminglying mapping out space. This, however, is a far more intimate album, one whose truths feel far more relatable. It's his best album, even better than the masterful Returnal or Zones Without People. It's one of my favorite records of the decade. It's one of the most haunting, beautiful albums I've ever heard.

The epitome of informed simplicity. Its cold vibrations invade my spine and bend me to its will.

Your feedback for Replica