One More From The Road (live album) by Lynyrd Skynyrd 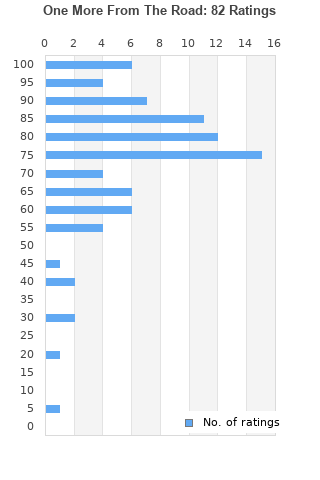 One More from the Road Lynyrd Skynyrd Band 8 - Track Tape Cartridge
Condition: Good
Time left: 3h 31m 3s
Ships to: Worldwide
$10.00
Go to store
Product prices and availability are accurate as of the date indicated and are subject to change. Any price and availability information displayed on the linked website at the time of purchase will apply to the purchase of this product.  See full search results on eBay

One More From The Road is ranked 4th best out of 38 albums by Lynyrd Skynyrd on BestEverAlbums.com.

Listen to One More From The Road on YouTube 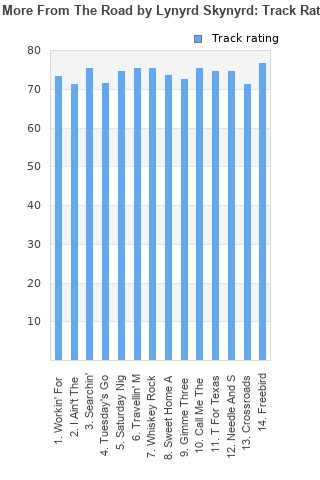 One More From The Road rankings

One More From The Road collection

One More From The Road ratings

Rating metrics: Outliers can be removed when calculating a mean average to dampen the effects of ratings outside the normal distribution. This figure is provided as the trimmed mean. A high standard deviation can be legitimate, but can sometimes indicate 'gaming' is occurring. Consider a simplified example* of an item receiving ratings of 100, 50, & 0. The mean average rating would be 50. However, ratings of 55, 50 & 45 could also result in the same average. The second average might be more trusted because there is more consensus around a particular rating (a lower deviation).
(*In practice, some albums can have several thousand ratings)
This album is rated in the top 24% of all albums on BestEverAlbums.com. This album has a Bayesian average rating of 74.7/100, a mean average of 74.1/100, and a trimmed mean (excluding outliers) of 74.9/100. The standard deviation for this album is 18.4.

One More From The Road favourites

One More From The Road comments

An enjoyable live album. All the songs you want are there, including of course, freebird. It's not a spectacular album, but it's very good.

I saw these guys around 75/76 once in Florida. It was one of the most disappointing shows I've ever been to. Ronnie was drunk as hell, couldn't remember the words to the songs. The band was sloppy, they sounded like a mediocre bar band. Ruined me forever on this group.

Quite simply one of the greatest rock albums of all-time.

The only live document of the original line up shows what an awesome live band they were.

Your feedback for One More From The Road