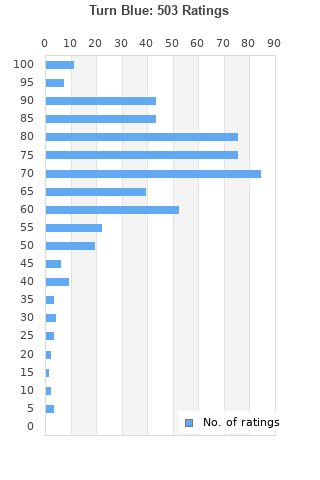 The Black Keys-Turn Blue (UK IMPORT) VINYL NEW
Condition: New
Time left: 13h 59m 57s
Ships to: Worldwide
$44.28
Go to store
Product prices and availability are accurate as of the date indicated and are subject to change. Any price and availability information displayed on the linked website at the time of purchase will apply to the purchase of this product.  See full search results on eBay

Turn Blue is ranked 4th best out of 11 albums by The Black Keys on BestEverAlbums.com.

The best album by The Black Keys is Brothers which is ranked number 312 in the list of all-time albums with a total rank score of 6,191. 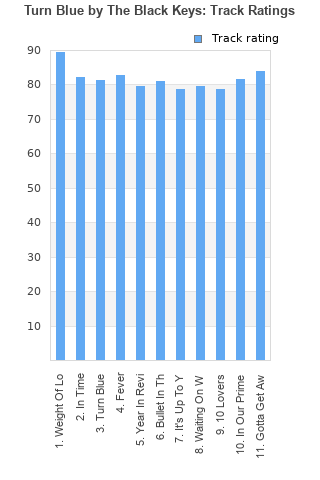 Rating metrics: Outliers can be removed when calculating a mean average to dampen the effects of ratings outside the normal distribution. This figure is provided as the trimmed mean. A high standard deviation can be legitimate, but can sometimes indicate 'gaming' is occurring. Consider a simplified example* of an item receiving ratings of 100, 50, & 0. The mean average rating would be 50. However, ratings of 55, 50 & 45 could also result in the same average. The second average might be more trusted because there is more consensus around a particular rating (a lower deviation).
(*In practice, some albums can have several thousand ratings)
This album has a Bayesian average rating of 71.9/100, a mean average of 70.9/100, and a trimmed mean (excluding outliers) of 71.9/100. The standard deviation for this album is 15.9.

My favourite album by The Black Keys, with the opening songs being one of my favourites of the decade. Could be a bit higher up the charts

I don't know what's happening? this album is fantastic maybe the best of the band ... good musicians ... musical variety ... a bit of progressive rock ... a little pop / rock / blues and a globally strong album...better than brothers... The first song are TOP.

Weight of Love is great, Turn Blue is pretty good, but the rest is very unmemorable.

Underrated as hell. This is easily their most mature album lyrically and the first album bold enough to tamper with their formula

The Black Keys were one of the first comteporary bands that attracted my attention all the way back in 2014 when I was first getting into rock music, most of what I listened back then was their hits, a few years ago when I first listened to this album It blow me away, It instantly became one of my favorite non-classic album. Time has passed and I became more and more distant from this album, and from The Black Keys in general, but looking back into It, and listening to It again, It still a great album, It gave me good memories.

Because of the musical exploration and maturity of lyrical themes, this is The Black Keys' second best album.

I still don't understand why his album is considered a dissapoinment. I think it's their most interesting album.

High quality collection of songs with no filler.

Not bad, sometimes it reminds me of Arctic Monkeys / Alex Turner...

Your feedback for Turn Blue