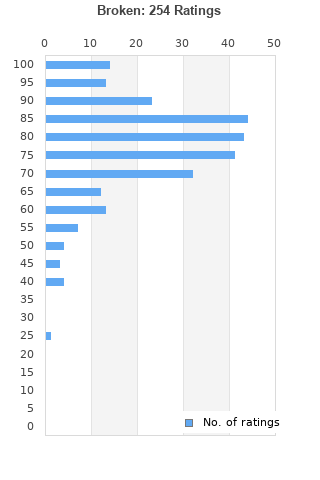 2 ROCK CD LOT NIN NINE INCH NAILS BROKEN REZNOR + STP STONE TEMPLE PILOTS No. 4
Condition: Good
Time left: 11h 45m 59s
Ships to: Worldwide
$7.95
Go to store
Product prices and availability are accurate as of the date indicated and are subject to change. Any price and availability information displayed on the linked website at the time of purchase will apply to the purchase of this product.  See full search results on eBay

Broken is ranked 7th best out of 22 albums by Nine Inch Nails on BestEverAlbums.com.

The best album by Nine Inch Nails is The Downward Spiral which is ranked number 141 in the list of all-time albums with a total rank score of 12,333. 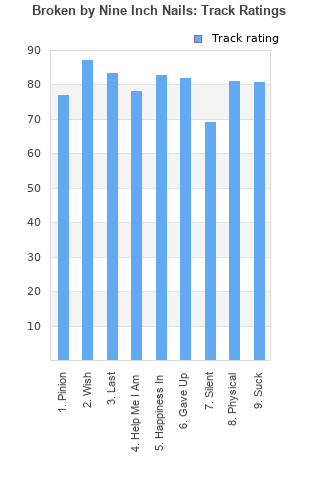 Rating metrics: Outliers can be removed when calculating a mean average to dampen the effects of ratings outside the normal distribution. This figure is provided as the trimmed mean. A high standard deviation can be legitimate, but can sometimes indicate 'gaming' is occurring. Consider a simplified example* of an item receiving ratings of 100, 50, & 0. The mean average rating would be 50. However, ratings of 55, 50 & 45 could also result in the same average. The second average might be more trusted because there is more consensus around a particular rating (a lower deviation).
(*In practice, some albums can have several thousand ratings)
This album is rated in the top 4% of all albums on BestEverAlbums.com. This album has a Bayesian average rating of 77.3/100, a mean average of 77.2/100, and a trimmed mean (excluding outliers) of 77.4/100. The standard deviation for this album is 13.4.

Upon giving this album more listens (and with the new updated mix), I'm starting to appreciate this album more. Not the side of Nine Inch Nails I like the most, but still great.

The album is a mixed bag in my opinion. This album has the most metal to it's sound of the NIN catalogue, and that's not a positive point in my opinion. "Wish" and the instrumentals are great, but the rest is not to my liking.

My favorite of the NIN catalog, even though my inaugural spin in the car after having purchased it went like so: "This is the first day of my last days [SPEAKER BLOWN]"

Not a bad record, the CD packaging it came in is cool.

A big evolution for NIN that brings them closer to their immortal sound. My only problem is that after 3 years I would have liked something a bit longer, but aside from that it's wonderful!

Quite possibly the most bizarre album I own.

Your feedback for Broken