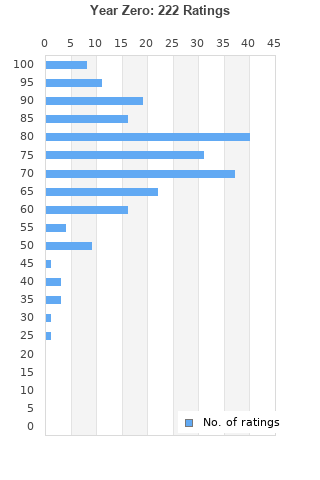 Nine Inch Nails - Year Zero NEW CD
Condition: Brand New
Time left: 14h 43m 45s
Ships to: Worldwide
£5.16
Go to store
Product prices and availability are accurate as of the date indicated and are subject to change. Any price and availability information displayed on the linked website at the time of purchase will apply to the purchase of this product.  See full search results on eBay

Year Zero is ranked 5th best out of 21 albums by Nine Inch Nails on BestEverAlbums.com.

The best album by Nine Inch Nails is The Downward Spiral which is ranked number 143 in the list of all-time albums with a total rank score of 12,432. 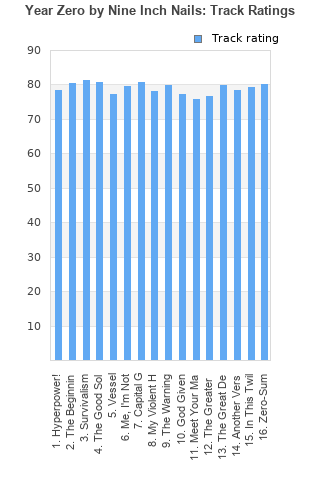 Rating metrics: Outliers can be removed when calculating a mean average to dampen the effects of ratings outside the normal distribution. This figure is provided as the trimmed mean. A high standard deviation can be legitimate, but can sometimes indicate 'gaming' is occurring. Consider a simplified example* of an item receiving ratings of 100, 50, & 0. The mean average rating would be 50. However, ratings of 55, 50 & 45 could also result in the same average. The second average might be more trusted because there is more consensus around a particular rating (a lower deviation).
(*In practice, some albums can have several thousand ratings)
This album is rated in the top 18% of all albums on BestEverAlbums.com. This album has a Bayesian average rating of 74.9/100, a mean average of 74.5/100, and a trimmed mean (excluding outliers) of 75.0/100. The standard deviation for this album is 14.3.

Trent's masterpiece, and I don't think it will ever sound dated.

Out coming from the typical sounds, this album takes to be the most electronic that Reznor ever made, he gives him time to create 16 different sounds (not the best creativity comparing each one) that every song dives to amaze people while listening, and he still singing sad, negative, creepy lyrics, mad agresive sounds, with crazy chorus and stranged way to sing, he´s been making the most unique music since decades, this album gives, simply, the best view of unique mental creativity

Best song: Survivalism
Worst song: Another Version of the Truth

The last few songs are great, the rest... not so much.

The first time an NIN album didn't take forever to come out. It's a good album with some real highlights but there are a lot of boring parts too.

I enjoyed this apocalyptic concept album.

Sprawling album which doesn't quite manage to carry itself all the way. In parts it is very good though and a huge dark forboding atmosphere. The concept is also out there in the stratosphere too. Certainly worth it if you liked his earlier work. No drop in the standard of his songwriting.

Your feedback for Year Zero