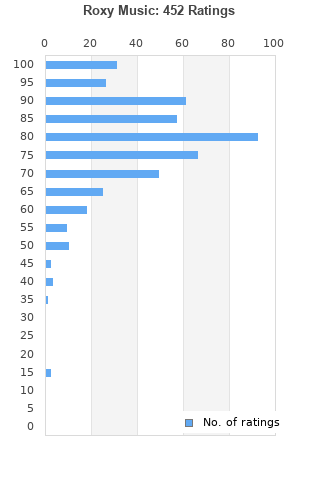 Roxy Music is ranked 3rd best out of 17 albums by Roxy Music on BestEverAlbums.com.

The best album by Roxy Music is For Your Pleasure which is ranked number 479 in the list of all-time albums with a total rank score of 4,003. 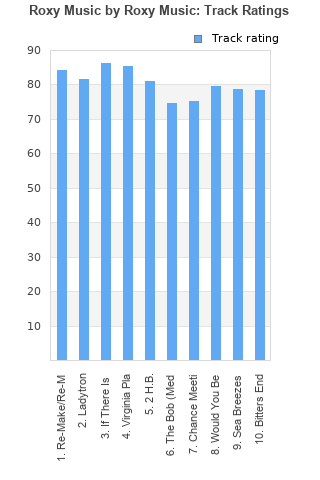 If There Is Something
Rating: 86 (93 votes)Comments:

Rating metrics: Outliers can be removed when calculating a mean average to dampen the effects of ratings outside the normal distribution. This figure is provided as the trimmed mean. A high standard deviation can be legitimate, but can sometimes indicate 'gaming' is occurring. Consider a simplified example* of an item receiving ratings of 100, 50, & 0. The mean average rating would be 50. However, ratings of 55, 50 & 45 could also result in the same average. The second average might be more trusted because there is more consensus around a particular rating (a lower deviation).
(*In practice, some albums can have several thousand ratings)
This album is rated in the top 2% of all albums on BestEverAlbums.com. This album has a mean average rating of 79.0/100. The trimmed mean (excluding outliers) is 79.3/100. The standard deviation for this album is 13.2.

Solid debut, which in ‘72 must have sounded like rock n roll from Mars. Clearly influenced by Bowie and Zappa, but with their own very distinct sound.

Solid album that doesn't drag except a little at the end.

Quite a pleasant surprise from a generation older than I. Energetic. Unique. Enjoyable.

Definetly one of the top 5 DEBUT albums ever relised. If not the best. LOVE IT!

Interesting enough that I immediately listened to their next album.

For sure my favorite record of theirs. It's not to pop or new wave, and it's not to over produced. Much more raw than their later work.

My second favorite album from Roxy Music (after Avalon) is surprisingly sophisticated for a debut album, mixing in inventive music but not in an immature sense. If anything it's just a bit overindulgent at times, but overall this captures very well the bewildering lives of the rich and famous jet set, with just enough humor and tragedy sprinkled in.

I have the first four Roxy albums and this is the one I turn to the most. I'm not old enough (!) to have been aware of these when released but the Avalon era I do remember and wasn't keen at the time. Later I got into early RM mainly because my favourite band (Men Without Hats) covered Editions of You (off album 2), and I like it. Virginia Plain wasn't on the original UK release...but it's a great track. Something a bit different, and definitely an enjoyable album (although I admit The Bob (medley) is a bit oddball and Chance Meeting's kind of weird too. Would have rated it higher but for these two tracks.

One of the all time great debuts. A brilliant fusion of glam, avant-garde, rock, and, pre-Beatles pop. Bryan Ferry's voice has a bit of Bowie about, with a sprinkling of the young Presley and Sinatra. Opener, re-make/re-model, still blows you away with it's power and it's quirkiness, while, Virginia plain, is a stunning track, one of the best singles of the seventies, and the first of many fine 45's from Roxy over the next decade. Other standouts are, ladytron, and 2H.B. Closing track, bitters end, is a jazz pop ballad, the kind of which Ferry loves. One of the most important factors of the success of this album is Brian Eno's simplistic keyboard flourishes, they really are the icing on the cake. All in all, an excellent record, with more brilliance still to come.

Your feedback for Roxy Music