The Scream (studio album) by Siouxsie And The Banshees 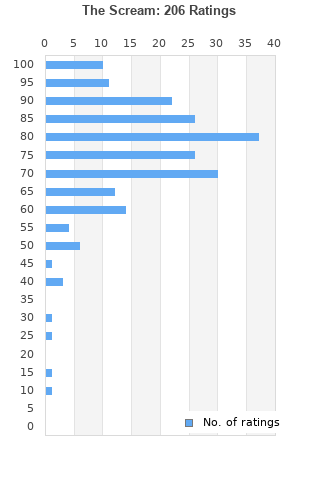 The Scream is ranked 2nd best out of 16 albums by Siouxsie And The Banshees on BestEverAlbums.com.

The best album by Siouxsie And The Banshees is Juju which is ranked number 642 in the list of all-time albums with a total rank score of 2,893. 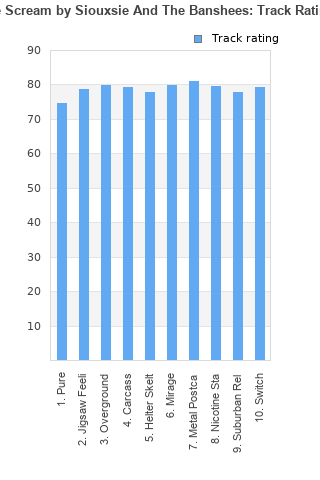 Rating metrics: Outliers can be removed when calculating a mean average to dampen the effects of ratings outside the normal distribution. This figure is provided as the trimmed mean. A high standard deviation can be legitimate, but can sometimes indicate 'gaming' is occurring. Consider a simplified example* of an item receiving ratings of 100, 50, & 0. The mean average rating would be 50. However, ratings of 55, 50 & 45 could also result in the same average. The second average might be more trusted because there is more consensus around a particular rating (a lower deviation).
(*In practice, some albums can have several thousand ratings)
This album is rated in the top 4% of all albums on BestEverAlbums.com. This album has a Bayesian average rating of 77.2/100, a mean average of 76.2/100, and a trimmed mean (excluding outliers) of 77.4/100. The standard deviation for this album is 14.9.

Just a great album. Still sounds good today. I remember going to see them in Hemel Hempstead - must have been 1979. Someone dropped a chair off the balcony onto someone else's head. Aaah, fun times.

Striking debut one of the first recognizable post punk albums. Sonically ahead of its time the band grew from here but this remains memorable for tracks like Jigsaw Feeling, Suburban Relapse & Switch.

With all the best punk records, you can feel the energy jump out from the grooves, this is no exception. Though this isn't really a punk record is it? We're definitely in post punk territory here. Very influential. Oi this is not.

Probably their most punky album, the scream shows off the unrefined talent of a young band.

A fantastic (post)punk album, one of the first of the genre. So dark, eccentric, intense and at the same time simple and straightforward. The guitar intro to Switch sounds so beautiful and the songwriting is excellent and consistent. I'm not a big fan of Helter Skelter cover, that's the only not so fantastic moment for me here, although it's not a terrible cover.

It's ultimately a punk album, though with many gothic rock overtones that are very ahead of their time. Quite an intense listen.

The debut album from The Banshees is one of the great late seventies British releases. A stunning fusion of psychedelic rock, goth, new wave punk, and, pop art, the scream, is not just a great first record, it's also probably the Banshees best LP. Jigsaw feeling, mirage, and, switch, are all excellent. A superb album.

Very eerie and dark. The songs on Juju may be their best, but this album is probably my favorite from Siouxsie.

Your feedback for The Scream