Bringing Down The Horse (studio album) by The Wallflowers

Bringing Down The Horse by The Wallflowers
Year: 1996
Overall rank: 2,540th 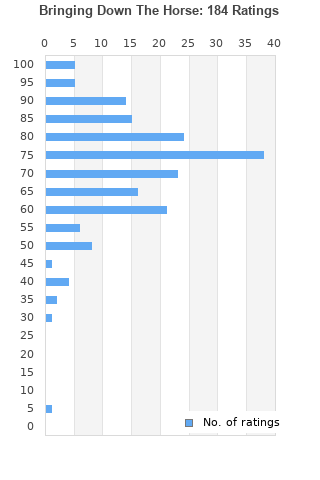 Bringing Down the Horse The Wallflowers MUSIC CD EXCELLENT CONDITION
Condition: Very Good
Time left: 1h 28m 30s
Ships to: Worldwide
$1.85
Go to store
Product prices and availability are accurate as of the date indicated and are subject to change. Any price and availability information displayed on the linked website at the time of purchase will apply to the purchase of this product.  See full search results on eBay

Bringing Down The Horse is ranked as the best album by The Wallflowers. 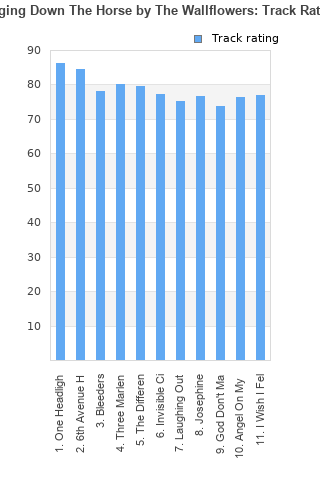 Bringing Down The Horse rankings

Bringing Down The Horse collection

Bringing Down The Horse ratings

Rating metrics: Outliers can be removed when calculating a mean average to dampen the effects of ratings outside the normal distribution. This figure is provided as the trimmed mean. A high standard deviation can be legitimate, but can sometimes indicate 'gaming' is occurring. Consider a simplified example* of an item receiving ratings of 100, 50, & 0. The mean average rating would be 50. However, ratings of 55, 50 & 45 could also result in the same average. The second average might be more trusted because there is more consensus around a particular rating (a lower deviation).
(*In practice, some albums can have several thousand ratings)
This album has a Bayesian average rating of 72.2/100, a mean average of 71.8/100, and a trimmed mean (excluding outliers) of 72.2/100. The standard deviation for this album is 14.8.

Bringing Down The Horse favourites

Bringing Down The Horse comments

Just ignore the Dylan comparisons and you'll enjoy this.

I'm really surprised to see how low this on overall rankings

One Headlight is classic.

I Wish I Felt Nothing, Bleeders, Invisible City, and to a lesser extent, Josephine are all great great songs.

They are blue collar band in the vain of Tom Petty's Heartbreakers. Comparing Jakob Dylan to his father isn't fair but his writing is above average and sometimes very good.

I didn't think this album would be considered underrated, but at least here, it really is.

Now the next album to follow is criminally underrated. Breach is better than this and this is great

This album just seemed very pop to me. Jakob Dylan's songwriting is nowhere near that of his father's. While "Three Marlenas" was decent there were no eye-opening tracks.

Yeah, I think its great. One of the first albums I ever bought, and I still listen to it regularly. There isn't a song on the album that I skip.

The second half is very weak, but the first half is too good to leave off my list.

Most of this album is just plain annoying. The rest is just your standard 90s rock. Pass.

I'll actually take the first 5 tracks. This is not a terrible album.

The first two tracks in this really don't get much better, pity the rest of the album is quite average

It certainly isn't a classic,. and Jakob Dylan isn't the same type of songwriter as his father, but this was my first album I ever owned in my life. Back when I was 7 I heard that One Headlight was number1 and I begged my parents to get it for me for my birthday. It took a few years to grow on me but if it weren't for this album, I'm not sure where I'd be musically right now.

Your feedback for Bringing Down The Horse