To Bring You My Love (studio album) by PJ Harvey 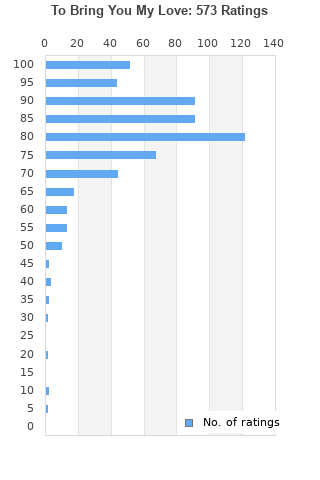 PJ Harvey ‎– To Bring You My Love [Audio CD] Disc & Pamphlet ONLY
Condition: Good
Time left: 11h 31m 3s
Ships to: Worldwide
$14.95
Go to store
Product prices and availability are accurate as of the date indicated and are subject to change. Any price and availability information displayed on the linked website at the time of purchase will apply to the purchase of this product.  See full search results on eBay

To Bring You My Love is ranked 3rd best out of 15 albums by PJ Harvey on BestEverAlbums.com.

The best album by PJ Harvey is Let England Shake which is ranked number 300 in the list of all-time albums with a total rank score of 6,669.

Listen to To Bring You My Love on YouTube 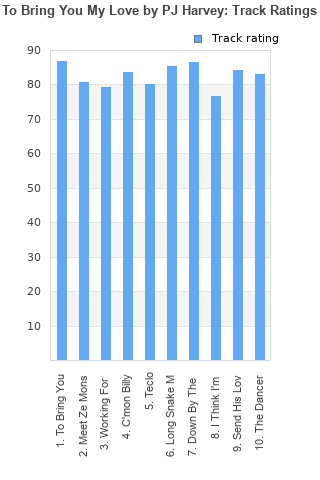 To Bring You My Love rankings

To Bring You My Love collection

To Bring You My Love ratings

Rating metrics: Outliers can be removed when calculating a mean average to dampen the effects of ratings outside the normal distribution. This figure is provided as the trimmed mean. A high standard deviation can be legitimate, but can sometimes indicate 'gaming' is occurring. Consider a simplified example* of an item receiving ratings of 100, 50, & 0. The mean average rating would be 50. However, ratings of 55, 50 & 45 could also result in the same average. The second average might be more trusted because there is more consensus around a particular rating (a lower deviation).
(*In practice, some albums can have several thousand ratings)
This album is rated in the top 1% of all albums on BestEverAlbums.com. This album has a Bayesian average rating of 82.2/100, a mean average of 81.5/100, and a trimmed mean (excluding outliers) of 82.4/100. The standard deviation for this album is 13.6.

To Bring You My Love favourites

To Bring You My Love comments

Her best album in my opinion. It is also her heaviest and darkest, and she never fully returned to this sound again with only a few exceptions. Probably the most electric and interesting female artist in the past 25 years if you ask me, but I understand she isn't for everyone, and a few of these songs, while they are all amazing, do go on just a wee bit too long.

Atmosphere is fantastic- total 90s techie. The only issue? The songs are repetitive and consequently feel lengthy, and are not much more than mood music.

Very tribal music. Dark, hypnotic, always foreseeing the shade of doom on the horizon but never blatantly revealing the horror itself. I honestly can't name a single weak cut on the record (maybe "I Think I'm a Mother", but I don't want to put that one down), and the musicianship is uniformly good. Harvey's vocals in particular are at their best: I've never heard a woman sound this menacing in my life. Great work. A top 5 album of 1995.

Requires being in a very specific mood to properly enjoy, though. That's the only bad thing I can think about it.

P.J.Harvey sings the blues. To bring you my love, sees Harvey incorporating more American influences into her music. It's also a more slickly produced LP. It is also one of her best. In fact I wouldn't disagree with anyone claiming any of her albums with being her best(except for, uh huh her, and, is this desire?), and this is certainly one of them. This record also features some amazing individual songs. C'mon Billy, down by the water, and the title track are just three of many excellent cuts. TBYML, is an essential PJ Harvey album.

For me, this is the definitive early PJ Harvey record. It perfectly straddles the raw, dark energy of her earlier releases with the songcraft of her later releases. A wonderful record.

PJ Harvey has to be about the most under-appreciated rock artist out there, bar none. If you're sick of the formula played on pop or alternative radio or think that Lilith Fair's a great idea but doesn't embrace the harder feminine spirit, give PJ Harvey a try.

Your feedback for To Bring You My Love