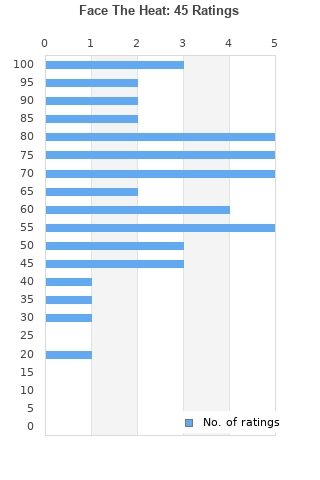 Face The Heat is ranked 15th best out of 33 albums by Scorpions on BestEverAlbums.com.

The best album by Scorpions is Blackout which is ranked number 1794 in the list of all-time albums with a total rank score of 955. 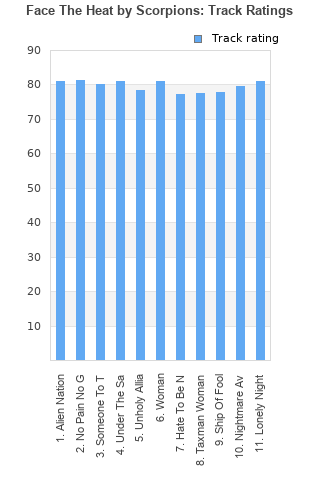 Rating metrics: Outliers can be removed when calculating a mean average to dampen the effects of ratings outside the normal distribution. This figure is provided as the trimmed mean. A high standard deviation can be legitimate, but can sometimes indicate 'gaming' is occurring. Consider a simplified example* of an item receiving ratings of 100, 50, & 0. The mean average rating would be 50. However, ratings of 55, 50 & 45 could also result in the same average. The second average might be more trusted because there is more consensus around a particular rating (a lower deviation).
(*In practice, some albums can have several thousand ratings)
This album has a Bayesian average rating of 68.6/100, a mean average of 67.5/100, and a trimmed mean (excluding outliers) of 67.5/100. The standard deviation for this album is 18.3.

Possibly one of my favourites albums of the 90s.
I used to have a cassette with 2 more songs that were actually part of the album, not typed as "bonus tracks": 'Destin' and 'Daddy's Girl'. The last is one of the finest Scorps ever. Too bad this album is completely overlooked in general. It rocks

'Alien Nation' and 'No Pain No Gain' ranks among the greatest Scorps songs. 'Someone To Touch' has a more 'Crazy World' sound. 'Under The Same Sun' is a great slow song that was a huge international hit. The "Side 2" is even more rocker. Lesser-known high quality material is there, like 'Taxman Woman', 'Ship Of Fools' and the ballad 'Lonely Nights'. Great, great album.

Your feedback for Face The Heat