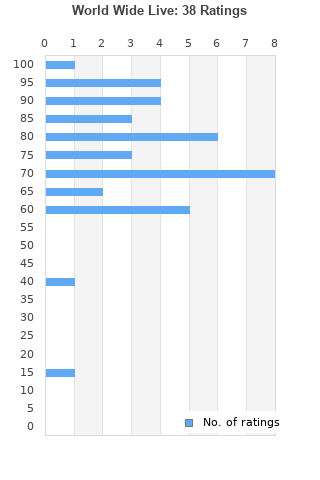 World Wide Live is ranked 19th best out of 34 albums by Scorpions on BestEverAlbums.com.

The best album by Scorpions is Blackout which is ranked number 1815 in the list of all-time albums with a total rank score of 935. 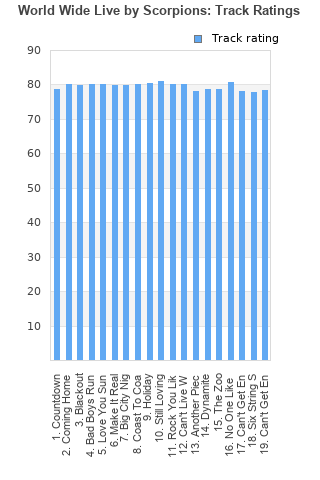 Rating metrics: Outliers can be removed when calculating a mean average to dampen the effects of ratings outside the normal distribution. This figure is provided as the trimmed mean. A high standard deviation can be legitimate, but can sometimes indicate 'gaming' is occurring. Consider a simplified example* of an item receiving ratings of 100, 50, & 0. The mean average rating would be 50. However, ratings of 55, 50 & 45 could also result in the same average. The second average might be more trusted because there is more consensus around a particular rating (a lower deviation).
(*In practice, some albums can have several thousand ratings)
This album is rated in the top 9% of all albums on BestEverAlbums.com. This album has a Bayesian average rating of 75.6/100, a mean average of 74.7/100, and a trimmed mean (excluding outliers) of 76.4/100. The standard deviation for this album is 16.1.

One of the best concerts ever recorded

I still remember the quite pointless debate among fans: 'Tokyo Tapes' or 'World Wide Live'?. My answer as always been: "why you just can't have both"? They belong to different eras, with different line-ups and a completely different tracklist.
'Tokyo Tapes' is really a heavy album, while this one is more like stadium rock. Awe-inspiring renditions of all 80s classics. And also, along with 'Tokyo Tapes' and 'Made in Japan', one of the very few albums that were honesty live. No overdubs here. No needed too!. The band is at the top of their game. Klaus' voice is phenomenal, guitars are killer, rhythm section is tight, driving and powerful, and there's great audience response. The songs were selected from 5 stellar shows in the USA, France and Germany. Among highlights:

Too bad the DVD has never been released!

Your feedback for World Wide Live