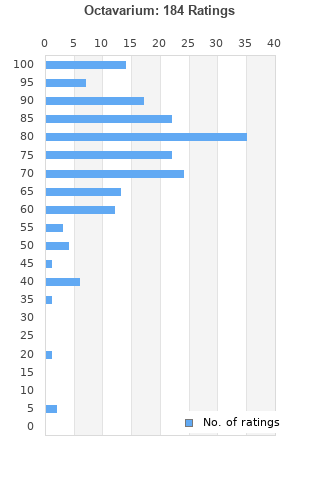 Octavarium is ranked 6th best out of 35 albums by Dream Theater on BestEverAlbums.com. 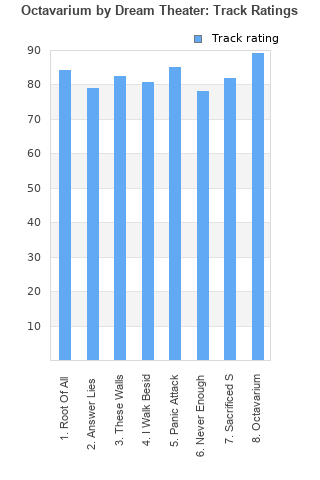 Rating metrics: Outliers can be removed when calculating a mean average to dampen the effects of ratings outside the normal distribution. This figure is provided as the trimmed mean. A high standard deviation can be legitimate, but can sometimes indicate 'gaming' is occurring. Consider a simplified example* of an item receiving ratings of 100, 50, & 0. The mean average rating would be 50. However, ratings of 55, 50 & 45 could also result in the same average. The second average might be more trusted because there is more consensus around a particular rating (a lower deviation).
(*In practice, some albums can have several thousand ratings)
This album is rated in the top 6% of all albums on BestEverAlbums.com. This album has a Bayesian average rating of 76.5/100, a mean average of 75.5/100, and a trimmed mean (excluding outliers) of 76.7/100. The standard deviation for this album is 16.5.

Title track is godlike. Even if it has some songs, that were either melodramatic or plain meehy, the album is strong enough to hold up.

Probably Dream Theater's best work since Metropolis Part 2. The only forgettable song here is Sacrificed Sons, the rest is great. Great however, does not begin to describe the power of the title track.

One of the most creative concepts for an album I know

A classic album of Dream Theater, switching between the good (These Walls, Sacrified Sons) and the least (I Walk beside You, The Answer Lies Within). Too bad, the final song makes it a bit cumbersome, what was easily avoidable. A good album anyway.

A slight step above the previous two albums - it's certainly a great album, and probably above average compared to DT's other work. The album leans more on the soft side than the heavy side, but that's fine with me. Each track brings something interesting to the table, and I don't feel like any track meanders all that much except for Sacrificed Sons; its instrumental breakdown is pointless to the core. The intro to Octavarium, while atmospheric, seems to go on a little bit too long. Still, the rest of that 24-minute epic is wonderful old-school prog nostalgia. Another highlight is the emotionally-charged These Walls.

Your feedback for Octavarium